Virgin Orbit announced the successful completion of its wet dress rehearsal today prior to its third launch carrying U.S. Department of Defense and commercial satellites to Low Earth Orbit. 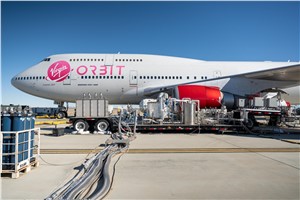 Virgin Orbit, which has announced a planned business combination with NextGen Acquisition Corp. II (“NextGen”), completed a full wet dress rehearsal of its air-launched LauncherOne satellite delivery service, taking the integrated system through a full run of procedures to verify the health of the system and the preparedness of the team.

“The successful completion of this final major test has us heading into the holiday season with excellent momentum and high confidence for our Above the Clouds launch,” said Chief Operating Officer Tony Gingiss. “It’s been an incredible year, delivering 19 satellites to orbit and ramping up our factory for 2022 – our team has earned a joyous and restful holiday with their families.”

With this critical test successfully completed and the bonus of adding an additional satellite to the payload stack earlier this month, Virgin Orbit is tracking towards a launch in January 2022. The launch window is set to open January 12th, 2022, and the launch itself will be livestreamed to the public. The spacecraft to be launched for this mission include satellites for the US Department of Defense’s Space Test Program, Polish company SatRevolution, and Spire Global, Inc. (NYSE: SPIR). Virgin Orbit has safely loaded the spacecraft in the vehicle’s payload adapter, and they are slated for delivery to the Mojave Air and Space Port in early January.