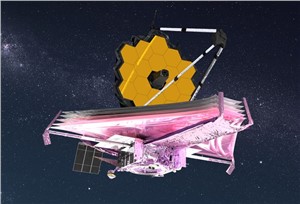 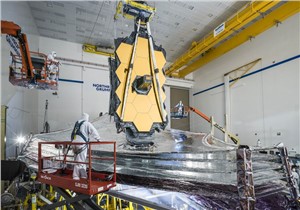 Approximately 30 minutes after launch, Webb detached from the Ariane 5 rocket, marking the beginning of a million-mile journey and the start of a two-week complex deployment process to unfold the spacecraft in preparation for arrival at Lagrange Point 2 (L2).

“Since the dawn of the space age, NASA, international partner agencies and industry partners, together with Northrop Grumman, have been defining what is possible in space science and exploration,” said Kathy Warden, chairman, chief executive officer and president, Northrop Grumman. “Over the next few weeks, the James Webb Space Telescope will transform into an awe-inspiring scientific tool that will usher in a new era in human discovery.”

During the journey to L2, Webb will convert from its stowed position in which it left Earth to the configuration that will allow it to see light coming from the earliest stars to shine in the Universe. Part of this journey is to unfold the tennis court-sized, five-layer sunshield around the sensitive mirrors that allow Webb to take pictures and collect data that will come back to Earth for scientific review. Once operational, Webb will explore farther than ever before into the cosmos, looking back 13.5 billion years.

To deliver this kind of scientific data, Webb incorporates innovative design, advanced technology, and groundbreaking engineering. Ten technological inventions were created to build the revolutionary telescope so that it can detect light from the first stars and galaxies. Some of these innovations include optics, detectors and thermal control systems.