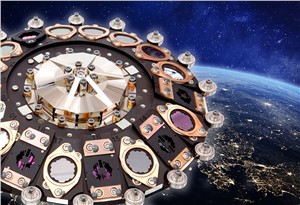 The "James Webb" space telescope will replace the successful "Hubble" telescope as the leading observation instrument in space in the coming months. Thanks to its 6.5m large primary mirror, the new observatory has a much higher sensitivity compared to "Hubble". The spectral resolution of its instruments allows the analysis of the formation history up to the chemical composition of the observed celestial bodies. Now the launch is imminent.

The space observatory has four scientific instruments on board. Two of the instruments, MIRI and NIRSpec, were developed and built in Europe. HENSOLDT Optronics and the Max Planck Institute for Astronomy Heidelberg (MPIA) made key contributions to both instruments with the cryomechanisms and spectrally splitting optics manufactured at HENSOLDT.

HENSOLDT's optical filter and grating wheel mechanisms allow the instruments to be configured precisely and reliably for different types of observations. MPIA was instrumental in their development and testing. For HENSOLDT Optronics and MPIA, the contribution to "James Webb" was a milestone in the successful collaboration in the development of increasingly powerful optical observing instruments.

The James Webb Space Telescope (JWST) will be positioned about 1.5 million kilometres from Earth and will orbit the Sun synchronously with Earth. This position in space allows particularly favourable conditions for high-resolution observation in the infrared wavelength range, which is crucial for this mission.

With a decisive contribution to the JWST, HENSOLDT Optronics demonstrates its capability as a state-of-the-art European technology centre in terms of design, development, production and testing of space optronics and electronics solutions. Its heritage in the space business dates back to the moon landing and Apollo 11. Since then, the Ostalb-based company has successfully participated in Earth observation missions and surveys of the icy moons of Mercury and Jupiter, among others. The company's Active Electronic Ally Scanned Array (AESA) radars have been used effectively in observation missions for more than twenty years. These capabilities are complemented by the HENSOLDT Space Consultancy, which advises space agencies such as the French CNES, the European ESA and the American NASA on mission implementation.