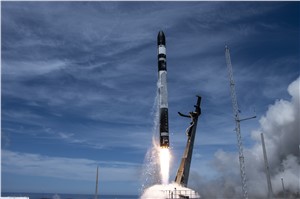 Rocket Lab founder and CEO, Peter Beck, says: “Congratulations and welcome to space once again, BlackSky. These back-to-back missions are a showcase of the benefits of rapid-launch in action: quick constellation expansion, streamlined access to space, and fast delivery of global insights to BlackSky customers that Rocket Lab is proud to facilitate with dedicated launch on Electron.”

The ‘A Data With Destiny’ mission is the latest launch for BlackSky as part of a multi-launch agreement with Spaceflight to deploy numerous BlackSky satellites on Electron. Rocket Lab has now deployed seven satellites to low Earth orbit for BlackSky on missions across 2019 and this year. Another two BlackSky satellites are scheduled for launch early next year on Electron from Rocket Lab Launch Complex 1 in New Zealand. Today’s successfully deployed satellites, along with those previously launched to space by Rocket Lab and the remaining pair of satellites next in line, represent the largest number of satellites BlackSky has dedicated to a single launch provider to date.

‘A Data With Destiny’ is Rocket Lab’s final launch for 2021, capping off a busy year for the company. With the successful deployment of spacecraft for government and commercial customers, Rocket Lab launches this year supported operations in Earth observation, weather monitoring, and Internet-of-Things, and enabled technology demonstrations in maritime surveillance, quantum computing, advanced AI, communications, and deployable sensors. The successful deployment of another Rocket Lab Photon spacecraft to space earlier this year is also representative of the company’s growth in space systems, including several strategic acquisitions that will bolster future Rocket Lab missions to the Moon, Mars, and Venus and further enable Rocket Lab to streamline access to space for satellites as an end-to-end space company. The next year for Rocket Lab includes a busy manifest of Electron launches for new and repeat satellite customers, and ongoing development of its next-generation launch vehicle Neutron, tailored for mea-constellation deployment, interplanetary missions, and eventually human spaceflight.