Real-time Simulations for Integration of Large Drones at and 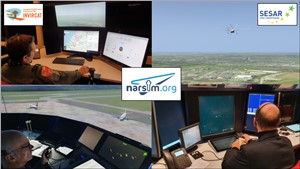 The number of drones entering European airspace increases. Safe and efficient integration of such traffic into the current operations at airports will be paramount. Therefore, Royal NLR validated procedures for the integration of larger drones at Rotterdam The Hague Airport.

In recent years, innovative technology emerged enabling unmanned flight and putting a strain on airspace as a resource. It is expected that the number of remotely piloted aircraft (often referred to as drones) will increase significantly in the near future. In November 2021 Royal NLR performed real-time simulations for the SESAR Exploratory Research Project INVIRCAT addressing some of the consequences of that development.

The project investigates the safe and efficient integration of the movements of remotely piloted aircraft (RPA) under instrument flight rules into current-day operations at and around smaller but significant airports such as Rotterdam The Hague Airport (ICAO: EHRD).

A Global and Regional Analysis: Focus on End User, Orbit, Service, and Region

The NLR simulation set-up included a high-fidelity tower and approach simulation environment (NARSIM Tower and NARSIM Radar) and a connected simulation platform for a generic Ground Control Station facility (called Multi Unmanned Aircraft Supervision Testbed, MUST) of an RPA. The chosen RPA was a fixed-wing Class VI UAS (in line with an EASA classification) with performances comparable but not identical to a General Atomics MQ-9 Reaper.

Experienced former air traffic controllers guided all aircraft in the traffic mix including the drone traffic. A military pilot was responsible for control of the RPA and so-called pseudo-pilots controlled the remaining visual (VFR) and instrument (IFR) traffic in the Terminal Manoeuvring Area (TMA) and at the airport.

The focus of the simulation was on validating project-defined procedures for nominal operations, but also for communication failure and conflicts between manned and unmanned IFR traffic. Furthermore, the impact of the system latency of the chosen technical architecture (for communication and for command and control of the RPA) on air traffic control operations was assessed. Additional sessions evaluated procedures for a handover of the RPA between two different ground control stations.

INVIRCAT
The INVIRCAT project simulations are carried out in co-operation with the German Aerospace Center (DLR) and the Italian Aerospace Research Center (CIRA). Both project partners are carrying out similar investigations for different procedures and in different operational environments. Other partners involved in the project are Deep Blue, Isdefe, ISSNOVA and Eurocontrol. Results of the simulation activities of the INVIRCAT project will be published in the second half of 2022.

This project has received funding from the SESAR Joint Undertaking under the European Union’s Horizon 2020 Research and Innovation Programme under Grant Agreement No 893375.

Tell a friend:
Real-time Simulations for Integration of Large Drones at and Around Airports