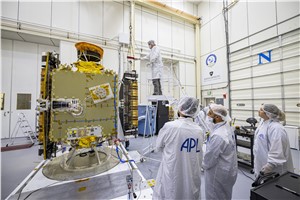 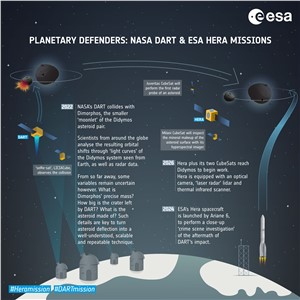 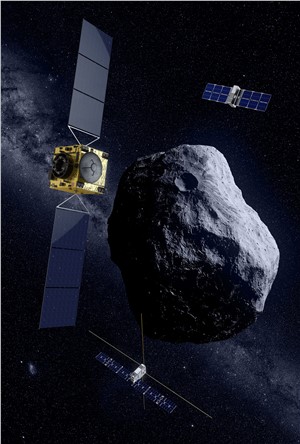 The world will be watching the milestone launch of NASA’s Double Asteroid Redirection Test, DART , spacecraft on Wednesday, 24 November, intended to alter one small part of the Solar System forever.

DART will collide with the small moon of an asteroid in order to shift its orbit around its parent body – to test the concept of diverting threatening objects away from Earth.

Furthermore, one group of Europeans is following DART’s launch campaign particularly closely: the team developing ESA’s Hera spacecraft , designed to undertake a close-up survey of the consequences of DART’s collision.

“It has taken a lot of hard work to reach the point oflaunching this first planetary defence mission  – we’re wishing our US counterparts a great and well-deserved success,” comments Ian Carnelli, overseeing ESA’s Hera mission.

“DART and Hera were originally conceived on a coordinated double-spacecraft basis, with one mission to perform the deflection and the other to perform precision measurements of the result.”

“Over the years, the implementation of the two missions was separated but international collaboration was maintained through the Asteroid Impact and Deflection Assessment, or AIDA , scientific consortium. And while the pair are designed to function separately, their overall science return will be boosted greatly by being able to combine their results.”

DART will collide with the smaller body of the Didymos binary asteroid system in September 2022, striking at a speed of around 6.6 km per second. While the Didymos asteroid system will maintain its motion around the Sun unperturbed, the collision is expected to shift the orbit of the 160-metre-diameter Dimorphos around its 780-metre-diameter parent Didymos in a small but distinct way – just a fraction of one per cent – sufficient to be measured with Earth-based telescopes and radar.

But observing from across space will still leave multiple unknowns, such as the precise mass of Dimorphos, its makeup and its internal structure – as well as the size and shape of the crater left by DART. So, in November 2024 Hera will head towards the Didymos system, commencing its detailed ‘crime scene investigation’ of the two asteroids in late 2026.

By gathering data close-up, Hera will help turn DART’s grand scale impact experiment into a well-understood and repeatable deflection technique – ready to be deployed if an asteroid should ever be spotted heading Earthward.

The main Hera spacecraft will also deploy a pair of shoebox sized CubeSats to perform supporting observations: Milani will make spectral surface observations, while Juventas will perform the first-ever radar soundings within an asteroid.

The Hera spacecraft is being built by OHB in Germany while other mission elements take shape across Europe. For instance, the engineering model of Hera’s precision guidance, navigation and control system – essential to guide the desk-sized spacecraft to and around its twin-asteroid destination – is being put together by GMV in Spain, while the Juventas radar prototype is currently undergoing testing at ESA’s ESTEC technical centre in the Netherlands.

The distant end point of all this activity will soon become much more tangible, notes Patrick Michel, CNRS Director of Research of France’s Côte d'Azur Observatory and Hera’s Principal Investigator. “Either directly or through its accompanying Italian-made LICIA ‘selfie-sat’, DART next year should give us our first brief close-up of the Didymos system.

“An international community of people are anticipating that initial glimpse, then the more detailed survey that will follow from Hera. In all there are hundreds of researchers from dozens of institutions located across Europe, the US and other countries as far afield as Japan and Uruguay involved in the two missions, their work coordinated through the AIDA collaboration, with a wide cross-participation between DART and Hera scientists.”

The station’s agile, 4.5m antenna, which is specifically designed for initial acquisition of a spacecraft following launch, will capture the first signal from DART after it separates from its Falcon 9 launcher and help maintain contact as the spacecraft heads into interplanetary space.

Later, additional ESA stations will support other phases of the mission.