Testing Mini-radar to Peer Inside Asteroid 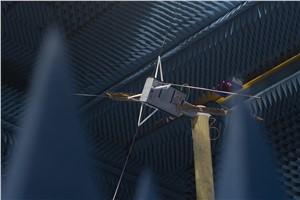 A specially upgraded radio-frequency chamber in ESA’s technical heart is testing what is set to become the smallest radar system to be flown in space, hosted aboard a breadbox-sized spacecraft.

Scheduled to fly to the Didymos binary asteroid system with ESA’s Hera mission for planetary defence in 2024, the compact radar aboard the Juventas CubeSat will perform the first ever radar sounding inside an asteroid. Juventas will peer up to 100 m deep within the 160-m-diameter Dimorphos moonlet of the 780-m-diameter Didymos asteroid.

CubeSats are mini-satellites built up from standardised 10-cm boxes. Juventas is a ‘6-unit’ CubeSat, measuring 10x20x30 cm, while its quartet of radar antennas measure 1.5 m long each. So the test campaign includes a structural model of the Juventas CubeSat, to evaluate how the body of the miniature spacecraft might affect the radar signals.

The test campaign is taking place inside the ‘Hybrid European Radio Frequency and Antenna Test Zone’ or Hertz chamber at ESA’s European Space Research and Technology Centre (ESTEC) in the Netherlands. However testing here only became feasible after a skillful upgrade.

“An essential element of anechoic test chambers like Hertz are the radio-absorbing foam spikes lining the inside walls, allowing tests to mimic the infinite void of space,” explains ESA antenna engineer Paul Moseley.

“But typically Hertz can only test down to 400 MHz, while Juventas’s main antennas will radiate at 60 MHz. At this frequency the spikes no longer absorb signals, so instead of a dark room the chamber would be turned into a hall of mirrors, throwing out multiple radio reflections that interfere with the accuracy of our measurements.”

ESA’s Hertz team worked with MVG in Italy to devise a new setup making lower frequency testing possible, initially as part of a general upgrade but then specially targeted to enable Juventas testing.

Paul adds: “It’s a combination of hardware and software that allows us to measure in this environment but still reconstruct the correct results, including fibreglass support towers that are transparent to antennas and software that combines measurements made at many different points across the room, in order to cancel out the reflection effects.”

Franco Perez Lissi  of ESA’s CubeSats Systems Unit is overseeing the Juventas testing: “We’re measuring the radiation pattern in a full sphere surrounding the antennas- the results of which should also be very useful for Juventas’s critical design review, taking place next month – as well as the total radiated power. This entire campaign additionally serves as a dress rehearsal of sorts for the flight model of Juventas, which is scheduled to be tested here in early 2023.”

The radar aboard Juventas is developed from the Rosetta spacecraft’s CONSERT radar system, which peered into the interior of Comet 67P/Churyumov–Gerasimenko. It is a synthetic aperture radar design, meaning it will take advantage of Juventas’s orbit 3 km above the surface of Dimorphos to integrate together multiple signal reflections and resolve them into images.

“We are proud to see Rosetta’s legacy living on in the next generation of deep-space missions,” adds Alain Herique of the University of Grenoble, Principal Investigator of Juventas’s JuRa low-frequency radar.

Juventas is being led for ESA by GomSpace company in Luxembourg with GMV in Romania, with its radar developed by the Planétologie et d'Astrophysique de Grenoble group at the University Grenoble and Technical University Dresden, with Astronika in Poland constructing the antennas and EmTroniX in Luxembourg contributing the signal generation system.

Hera will also be embarking a second deep space CubeSat, the Italian-led Milani, which will employ a multispectral imager to prospect the asteroid’s surface composition. Hera will be preceded to the Didymos asteroids by NASA’s DART spacecraft which will perform a test deflection of the smaller body. DART is due for launch next Wednesday, 24 November.

Tell a friend:
Testing Mini-radar to Peer Inside Asteroid