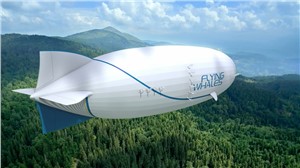 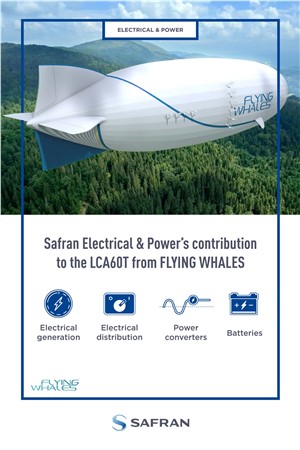 FLYING WHALES, which is developing an ambitious program for an airship with a large cargo capacity, and Safran Electrical & Power, a world leader in aeronautical electrical systems, have announced the signature of an agreement to fit the LCA60T airships with electrical generation, distribution and conversion systems.

The LCA60T (Large Capacity Airship 60 Tons) from FLYING WHALES, for the first time in aviation history, will allow to load and unload up to 60 tons of freight in hover flight. This rigid airship is intended for the wood longshoring, freight and exceptional transport markets. It provides an advantageous solution to global requirements for transporting heavy or oversized loads, for point-to-point transfer at low operating costs and reduced environmental impact compared to other options.

The contract concerns the entire fleet of 150 airships for the first ten years of production. Safran Electrical & Power will deliver the first electrical equipment at the end of 2022 for the ground tests. Meanwhile, FLYING WHALES is planning the first flight of its airship for the end of 2024 and the entry into service at the beginning of 2026.

"We are very proud to be among the partners of FLYING WHALES, a gem of French industry that is offering a cutting-edge project fully aligned with our driving principles: providing point-to-point transport and helping to reduce the carbon intensity of aircraft," said Hervé Blanc, Executive Vice President & General Manager of the Power division at Safran Electrical & Power. "After having designed the electrical systems of the brand-new generations of hybrid and fully electric aircraft, we are reaching a new stage in the revolution of aviation with this visionary and unique project."

"To carry out an aeronautical program as innovative and ambitious as the LCA60T, the quality of the industrial partnerships is crucial. Working hand-in-hand with Safran Electrical & Power is most certainly a guarantee of success in electrifying the world's largest aircraft. The architecture of the LCA60T's electrical system requires us to venture into an unprecedented area. This is what the teams at Safran Electrical & Power and our teams are succeeding in doing," said Vincent Guibout, Technical Director and Deputy Managing Director of FLYING WHALES.