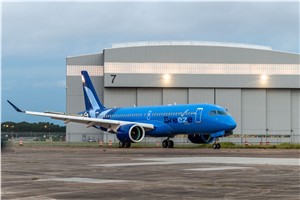 Pratt & Whitney and Breeze Airways (“Breeze”) today celebrated the unveiling of the airline’s first A220-300 aircraft, powered exclusively by GTF engines, during an event at the Airbus delivery center in Mobile, Alabama. At the ceremony, Pratt & Whitney announced that Breeze had finalized agreements for GTF engines to power a total of 80 A220-300 aircraft, including the airline’s original 60 ordered in 2018, as well as the airline’s recent order of another 20. Pratt & Whitney will also supply Breeze with engine maintenance, repair and overhaul (MRO) services through an EngineWise® Comprehensive long-term agreement.

“We are excited to fly our first Airbus A220 and to grow our fleet in partnership with Pratt & Whitney,” said David Neeleman, founder and CEO at Breeze Airways. “At Breeze, we’re working to make flying accessible and ‘seriously nice’ for everyone. With industry-leading fuel efficiency, Pratt & Whitney’s engines will help us fly more passengers, farther, quieter and more sustainably, at lower fares.”

Breeze currently operates a fleet of Embraer E190 and E195 aircraft, each equipped with an APS2300 auxiliary power unit (APU) from Pratt & Whitney.

“We are honored that Breeze chose to continue to expand its fleet with GTF-powered aircraft,” said Rick Deurloo, chief commercial officer at Pratt & Whitney. “For decades we’ve worked with David and the airlines he’s founded, and together we’ve helped them grow into successful businesses. We’re looking forward to taking all that experience to help the Breeze team build another winning airline.”