Studying the Edge of the Sun's Magnetic Bubble 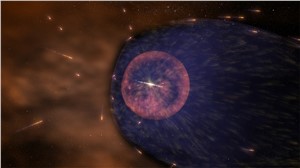 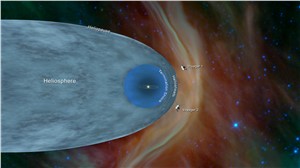 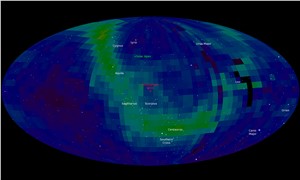 Our corner of the universe, the solar system, is nestled inside the Milky Way galaxy, home to more than 100 billion stars. The solar system is encased in a bubble called the heliosphere, which separates us from the vast galaxy beyond – and some of its harsh space radiation.

We’re protected from that radiation by the heliosphere, which itself is created by another source of radiation: the Sun. The Sun constantly spews charged particles, called the solar wind, from its surface. The solar wind flings out to about four times the distance of Neptune, carrying with it the magnetic field from the Sun.

“Magnetic fields tend to push up against each other, but not mix,” said Eric Christian, a lead heliosphere research scientist at NASA’s Goddard Space Flight Center in Greenbelt, Maryland. “Inside the bubble of the heliosphere are pretty much all particles and magnetic fields from the Sun. Outside are those from the galaxy.”

To understand the heliosphere, start by breaking apart the word, suggests David McComas, professor of astrophysical sciences at Princeton University in New Jersey. "Heliosphere" is the combination of two words: "Helios," the Greek word for the Sun, and "sphere," a broad region of influence (though, to be clear, scientists aren’t sure of the heliosphere’s exact shape).

The heliosphere was discovered in the late 1950s, and many questions about it remain. As scientists study the heliosphere, they learn more about how it reduces astronauts’ and spacecrafts' exposure to radiation and more generally, how stars can influence their nearby planets.

A balloon in space
Some radiation surrounds us every day. When we sunbathe, we’re basking in radiation from the Sun. We use radiation to warm leftovers in our kitchen microwaves and rely on it for medical imaging.

Space radiation, however, is more similar to the radiation released by radioactive elements like uranium. The space radiation that comes at us from other stars is called galactic cosmic radiation (GCR). Active areas in the galaxy – like supernovae, black holes, and neutron stars – can strip the electrons from atoms and accelerate the nuclei to almost the speed of light, producing GCR.

On Earth, we have three layers of protection from space radiation. The first is the heliosphere, which helps block GCR from reaching the major planets in the solar system. Additionally, Earth’s magnetic field produces a shield called the magnetosphere, which keeps GCR out away from Earth and low-orbiting satellites like the International Space Station. Finally, the gases of Earth’s atmosphere absorb radiation.

When astronauts head to the Moon or to Mars, they won’t have the same protection we have on Earth. They’ll only have the protection of the heliosphere, which fluctuates in size throughout the Sun’s 11-year cycle.

In each solar cycle, the Sun goes through periods of intense activity and powerful solar winds, and quieter periods. Like a balloon, when the wind calms down, the heliosphere deflates. When it picks up, the heliosphere expands.

“The effect the heliosphere has on cosmic rays allows for human exploration missions with longer duration. In a way, it allows humans to reach Mars,” said Arik Posner, a heliophysicist at NASA Headquarters in Washington, D.C. “The challenge for us is to better understand the interaction of cosmic rays with the heliosphere and its boundaries.”

How we study the heliosphere’s outer reaches
Many NASA missions study the Sun and the innermost parts of the heliosphere. But only two human-made objects have crossed the boundary of the solar system and entered interstellar space.

In 1977, NASA launched Voyager 1 and Voyager 2. Each spacecraft is equipped with tools to measure the magnetic fields and the particles it is directly passing through. After swinging past the outer planets on a grand tour, they exited the heliopause in 2012 and 2018 respectively and are currently in the outer heliosheath. They discovered that cosmic rays are about three times more intense outside the heliopause than deep inside the heliosphere.

However, the picture the Voyagers paint is incomplete.

“Trying to figure out the entire heliosphere from two points, Voyager 1 and 2, is like trying to determine the weather in the entire Pacific Ocean using two weather stations,” Christian said.

The Voyagers work with the Interstellar Boundary Explorer (IBEX) to study the heliosphere. IBEX is a 176-pound, suitcase-sized satellite launched by NASA in 2008. Since then, IBEX has orbited Earth, equipped with telescopes observing the outer boundary of the heliosphere. IBEX captures and analyzes a class of particle called energetic neutral atoms, or ENAs, that cross its path. ENAs form where the interstellar medium and the solar wind meet. Some ENAs stream back toward the center of the solar system – and IBEX.

“Every time you collect one of those ENAs, you know what direction it came from,” said McComas, IBEX’s principal investigator. “By collecting a lot of those individual atoms, you're able to make this inside out image of our heliosphere.”

In 2025, NASA will launch the Interstellar Mapping and Acceleration Probe (IMAP). IMAP’s ENA cameras are higher resolution and more sensitive than IBEX’s.

Mysteries abound
In 2009, IBEX returned a finding so shocking that researchers initially wondered if the instrument may have malfunctioned. That discovery became known as the IBEX Ribbon – a band across the sky where ENA emissions are two or three times brighter than the rest of the sky.

“The Ribbon was totally unexpected and not anticipated by any theories before we flew the mission,” McComas said. It’s still not entirely clear what causes it, but it is a clear example of the mysteries of the heliosphere that remain to be discovered.

“Our Sun is a star like billions of other stars in the universe. Some of those stars also have astrospheres, like the heliosphere, but this is the only astrosphere we are actually inside of and can study closely,” said Justyna Sokol, a research scientist at Southwest Research Institute in San Antonio, Texas. “We need to start from our neighborhood to learn so much more about the rest of the universe.”

Tell a friend:
Studying the Edge of the Sun's Magnetic Bubble