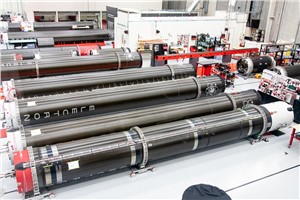 Rocket Lab USA, Inc (“Rocket Lab” or the “Company”) (Nasdaq: RKLB) has today revealed it will attempt a controlled ocean splashdown and recovery of the first stage of an Electron rocket during the company’s next launch in November. The mission will be Rocket Lab’s third ocean recovery of an Electron stage; however, it will be the first time a helicopter will be stationed in the recovery zone around 200 nautical miles offshore to track and visually observe a descending stage in preparation for future aerial capture attempts. The helicopter will not attempt a mid-air capture for this mission but will test communications and tracking to refine the concept of operations (CONOPS) for future Electron aerial capture.

The ‘Love At First Insight’ mission is scheduled to lift-off from Launch Complex 1 in New Zealand during a 14-day launch window that opens on November 11, 2021 UTC. The mission’s primary objective is to deploy two Earth-observation satellites for global monitoring company BlackSky, with the secondary objective to splash down and recover Electron’s first stage to further validate Rocket Lab’s recovery operations and hardware.

“As one of only two companies to recover an orbital-class booster from space, we’ve proven it’s possible to make Electron the world’s first orbital-class reusable small launch vehicle,” says Peter Beck, Rocket Lab founder and CEO. “We’ve perfected Electron’s controlled descent, demonstrated flawless parachute deployment, and successfully plucked stages from the ocean. Now we’re gearing up for the next stage – preparing to use a helicopter to catch a rocket as it descends to Earth from space. It’s ambitious, but with each recovery mission we’ve iterated and refined the hardware and processes to make the impossible ordinary. I’m excited to take what we learn from this launch and put it into practice with aerial capture missions in future.”

Rocket Lab will be tracking the stage’s descent from space and as it approaches 19,000 ft (5.7 km) from the ocean surface, a helicopter will be dispatched to conduct reconnaissance of the returning booster. The ‘Love At First Insight’ mission will also include new recovery hardware developments to Electron including an advanced parachute to be deployed from the first stage at a higher-altitude, allowing for a slower drift back to Earth to test communications and tracking for future aerial recovery. Electron also features improvements to the first stage heat shield which protects its nine Rutherford engines while they endure up to 2200 °C heat and incredible pressure on the descent back to Earth. A team of Rocket Lab engineers and technicians will again be stationed at sea with their purpose-built Ocean Recovery and Capture Apparatus (ORCA) to retrieve the stage from the ocean and return it to Rocket Lab’s production complex in New Zealand for analysis and inspection.

The ‘Love At First Insight’ mission follows two previous ocean splashdown recovery missions; the ‘Return to Sender’ mission in November 2020, and the ‘Running Out of Toes’ mission in May 2021.