More Than Half of the Oneweb Constellation Now Successfully Deployed 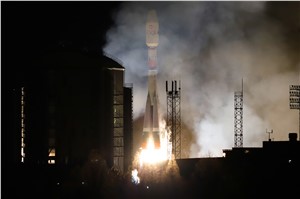 Performed on Thursday, October 14 at precisely 6:40 pm. local time at Russia’s Vostochny Cosmodrome (9:40 a.m. UTC), Soyuz Flight ST36 lifted-off with 36 OneWeb satellites onboard, bringing the size of the fleet in orbit to 358, after this successful deployment. Flight ST36 was the 61st Soyuz mission carried out by Arianespace and its Starsem affiliate. The mission lasted three hours and 51 minutes. The 36 satellites were deployed during nine separation sequences, at an altitude of 450 km.

“Congratulations to all the teams who made this eleventh launch dedicated to OneWeb’s satellites a success,” said Stéphane Israël, CEO of Arianespace. “ST36 marks a new milestone in our common history. Precisely one hour and eighteen minutes after liftoff, during the first separation sequence, we officially crossed the halfway mark for OneWeb’s constellation deployment! By the end of 2022, we will proudly operate eight more Soyuz launches in order to complete full the deployment of the constellation.”

OneWeb’s mission is to create a global connectivity platform through a next-generation satellite constellation in Low Earth Orbit. The OneWeb constellation will deliver high-speed, low-latency connectivity to a wide range of customer sectors, including aviation, maritime, enterprise and government. Central to its purpose, OneWeb seeks to bring connectivity to the hardest to reach places, where fiber cannot reach, and thereby bridge the digital divide.

The satellite prime contractor is OneWeb Satellites, a joint venture of OneWeb and Airbus Defence and Space. The satellites were produced in Florida, USA in its leading-edge satellite manufacturing facilities that can build up to two satellites per day on a series production line dedicated to spacecraft assembly, integration, and testing.

The launch of the satellites was operated by Arianespace and its Euro-Russian affiliate Starsem under contract with Glavkosmos, a subsidiary of Roscosmos, the Russian space agency. Arianespace is responsible for the overall mission and flight-worthiness, with the support of Starsem for launch campaign activities including management of its own launch facilities at the Baikonur Cosmodrome. RKTs-Progress (the Samara Space Center) is responsible for the design, development, manufacture and integration of the Soyuz launch vehicle as well as for the 3-stage Soyuz flight. NPO Lavotchkin is responsible for the launch preparation operations and flight of the Fregat orbital vehicle.

Tell a friend:
More Than Half of the Oneweb Constellation Now Successfully Deployed