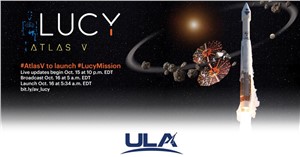 A United Launch Alliance (ULA) Atlas V rocket is in final preparations to launch the Lucy mission for NASA. The launch is on track for Oct. 16 from Space Launch Complex-41 at Cape Canaveral Space Force Station. Launch is planned for 5:34 a.m. EDT. The live launch broadcast begins at 5 a.m. EDT on Oct. 16 at www.ulalaunch.com.

“We are proud to launch this one-of-a-kind mission to explore the Trojan Asteroids,” said Gary Wentz, ULA vice president of Government and Commercial Programs. “Thank you to our mission partners for the outstanding teamwork as we finish preparations to launch this revolutionary mission, which will provide incredible insight into planetary origins and the formation of the solar system.”

The Lucy mission is a joint mission of NASA’s Goddard Spaceflight Center, the Southwest Research Institute and NASA’s Launch Services Program (LSP) based at Kennedy Space Center. This mission will utilize ULA’s proprietary Right Ascension of the Ascending Node (RAAN) steering, which has been incorporated into interplanetary missions to expand the launch window for any given day to increase the likelihood of launching during the typically restrictive planetary launch spans. This capability provides  the unique ability to steer back to the required RAAN position even if it launches significantly before or after the optimal time.

The mission will launch on an Atlas V 401 configuration rocket, that includes a 14-ft (4-m) large payload fairing (LPF) and stands 188 ft (57.3 m) tall. The Atlas booster for this mission is powered by the RD AMROSS RD-180 engine. Aerojet Rocketdyne provided the RL10C-1 engine for the Centaur upper stage.

This mission will be the 89th launch of the Atlas V rocket and marks the 100th launch from SLC-41 at Cape Canaveral Space Force Station. To date ULA has launched 145 times with 100 percent mission success.