Weather Satellite MetOp-SG B Rockets Ahead

Weather Satellite MetOp-SG B Rockets Ahead 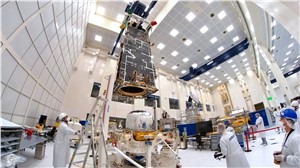 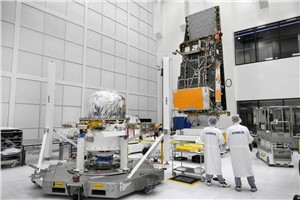 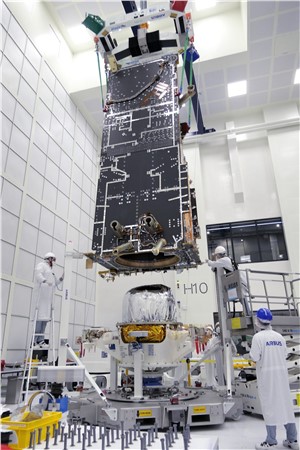 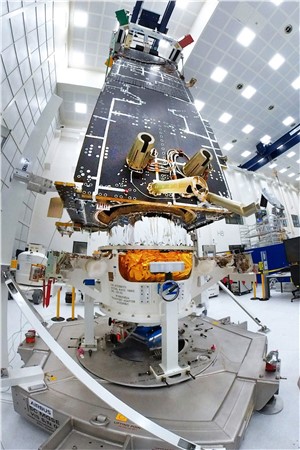 The first "B" model of the next generation polar orbiting weather satellite series MetOp-SG has received its rocket pack. In a tricky, millimetre-precise crane operation at Airbus’ satellite integration centre in Friedrichshafen (Germany), the six metre high satellite structure was integrated with its propulsion system.

The propulsion system, built by Airbus in Stevenage (United Kingdom), can accommodate 760 kg of hydrazine fuel to maintain the satellite’s attitude and orbit throughout its mission and, very importantly, enable a controlled re-entry over the South Pacific at the end of the satellite's mission, in accordance with the international space debris mitigation standards. The propulsion system includes twelve thrusters of 20 Newton (N) each for nominal orbit and anti-collision manoeuvres. Finally, the tank and the 400N main engine complete the propulsion system.

The MetOp-SG programme is being implemented by the European Space Agency in collaboration with EUMETSAT. The MetOp-SG satellite fleet consists of six satellites and will secure the continuation of meteorological observations from a polar orbit in the 2024-2045 timeframe. Comprehensive data from the suite of innovative European instruments will feed into forecasting models taking observations to a new standard.

Each satellite, with a launch mass of over four tons, will be launched separately. The satellites will be placed on the MetOp sun-synchronous polar orbit, at an average altitude of 831 kilometres. The nominal operational life of each satellite is 7.5 years. After seven years, the subsequent satellite of the same series will be launched, ensuring full operational coverage over a period of 21 years with a pair of A and B type satellites always in orbit.

The first launch of a MetOp-SG satellite is currently scheduled for early 2024.

MetOp-SG comprises two series of satellites, with three units in each series. The Satellite A series carries optical instruments and atmospheric sounders, while the Satellite B series features microwave instruments. The A series satellites are being developed and built under the industrial lead of Airbus in Toulouse (France), and the design and manufacture of the B series satellites is led by the company’s Friedrichshafen site in Germany.

Airbus leads an industrial consortium comprising more than 110 companies in 16 European countries and Canada, to supply more than 160 different pieces of equipment and services for the satellites’ platforms and instruments.

Tell a friend:
Weather Satellite MetOp-SG B Rockets Ahead