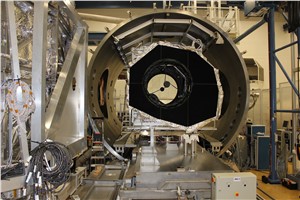 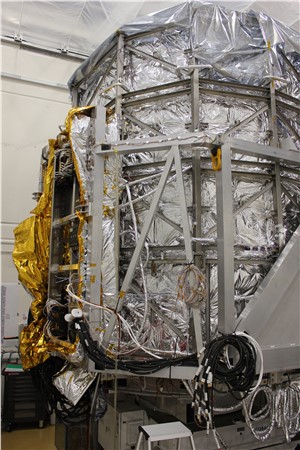 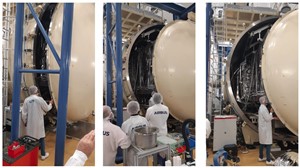 ESA’s Euclid mission has reached a new milestone in its development with successful testing of the telescope and instruments showing that it can operate and achieve the required performance in the extreme environment of space.

Euclid will study dark energy and dark matter. Whilst these cannot be seen directly by any telescope, their presence and influence can be inferred by observing the large scale distribution of galaxies in the Universe.

It has long been known that the Universe is expanding as measurements of distant galaxies show them moving away from us. The expansion, along with the growth of cosmic structures such as galaxy superclusters, are influenced by dark energy and dark matter, but scientists don’t fully understand these phenomena yet.

Euclid will image billions of galaxies with unprecedented accuracy out to a distance of ten billion light-years. The survey will cover more than a third of the night sky (celestial sphere). These measurements will enable astronomers to improve their understanding of the expansion history of the Universe and the growth rate of cosmic structures.

Euclid has two instruments provided by two consortia of European scientific institutes: the VISible imager (VIS) and the Near Infrared Spectrometer and Photometer (NISP). Both were integrated onto Euclid’s payload module at the end of 2020 by Airbus Defence and Space in Toulouse, France. The module was then transported to Centre Spatial de Liège (CSL) in Belgium in April this year.

At CSL, Euclid’s payload module was sealed in a large vacuum tank for 60 days where it underwent intensive testing. These tests are to check whether the telescope and instruments work according to expectations after all components had been assembled and connected. Any flaws in the system should be resolved before Euclid is launched into space, where physical repair is impossible.

In the vacuum tank, Euclid experienced simulated space conditions in vacuum with the structure cooled to -150oC, the same temperature it will operate in once in space.

Euclid will observe faint galaxies; at CSL, optical performance was verified by observing simulated point sources or ‘fake stars’. This was done using a specially developed collimator, which is essentially another telescope used in reverse to project the fake stars into the Euclid telescope. The telescope focused the light into both instruments, which produced images and spectra to test and verify the performance of the whole system from ‘end-to-end’.

“We are very happy about the results of the testing, which found the telescope to be in good shape,” says Alexander Short, Euclid’s Mission and Payload Manager.

“Testing revealed an anomaly which had to be resolved rapidly in order to avoid schedule delays. A ‘Tiger Team’ of ESA and industry experts was convened. The problem was diagnosed as a software issue which has since been resolved. We are happy to send a healthy telescope to the next stage of testing and integration with the rest of the spacecraft.”

The next step will be to transport the payload module to Thales Alenia Space in Torino, Italy, where it will be integrated with the service module to form the final, finished Euclid spacecraft. Euclid will then undergo another series of acceptance testing including mechanical tests and another thermal vacuum test at integrated system level.

Euclid will launch from Europe's Spaceport in French Guiana, with a launch window opening at the end of 2022. It will be orbiting the second Sun-Earth Lagrangian Point (L2), which is located 1.5 million kilometres directly 'behind' the Earth as viewed from the Sun.