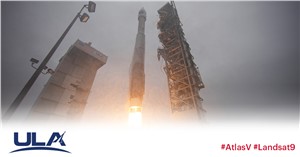 A United Launch Alliance (ULA) Atlas V rocket carrying the Landsat 9 mission for NASA lifted off on Sept. 27 at 11:12 a.m. PDT from Space Launch Complex-3 at Vandenberg Space Force Base. To date ULA has launched 145 times with 100 percent mission success.

“Thank you to our mission partners for the tremendous teamwork as we worked through a challenging health environment to launch this significant capability that will continue to enable future discoveries about our planet,” said Gary Wentz, ULA vice president of Government and Commercial Programs. “We are proud to empower critical Earth science research through our long-standing NASA partnership.”

This was the 88th launch of the Atlas V rocket and the mission marked the first four-burn Centaur mission for ULA on an Atlas V rocket. The first burn placed the Landsat spacecraft into the desired near-polar, sun-synchronous orbit, the second and third firings of the Centaur upper stage served to lower the orbital altitude and slightly change the orbital inclination to release the four CubeSats. A fourth and final burn by the Centaur's RL10C-1 cryogenic main engine executed the deorbit maneuver to dispose of the stage in a safe manner that does not contribute to space debris or cause an uncontrolled re-entry.

This was the 20th mission launched on an Atlas V in partnership with NASA’s Launch Services Program (LSP). ULA’s next launch, the Lucy mission for NASA, planned for Oct. 16, 2021, from Cape Canaveral Space Force Station, Florida, continues that partnership.