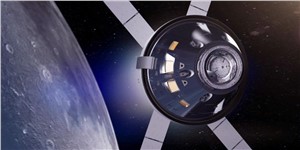 NASA has selected Aerojet Rocketdyne to build the Orion Main Engine (OME), the primary propulsion element for NASA’s Orion spacecraft that will be used to explore deep space. Under the contract, which runs through 2032, Aerojet Rocketdyne will deliver up to 20 new OME engines for use on future Artemis missions beginning with Artemis VII, or to support other NASA-sponsored, deep space exploration missions.

The OME is a 6,000 pound-thrust bipropellant engine that is mounted on Orion’s European Service module and will be built at Aerojet Rocketdyne’s Los Angeles, California, and Redmond, Washington, facilities. The engine is used for major maneuvers in space, such as entering and departing lunar orbit, and in some mission abort scenarios. The first six Orion missions will use refurbished Orbital Maneuvering System engines (OMS-E) that were provided by Aerojet Rocketdyne for the space shuttle program.

“Having originally designed and developed the OMS-E for the shuttle program, Aerojet Rocketdyne understands the engine’s materials, manufacturing processes and thrust levels,” said Aerojet Rocketdyne CEO and President Eileen P. Drake. “Now we are able to incorporate modern manufacturing techniques to provide NASA with a reliable, flight-proven and affordable engine to propel the Orion spacecraft and return astronauts to the Moon. We understand this engine inside and out and are excited to develop its next generation in support of future Artemis missions.”

In addition to the main engine, Aerojet Rocketdyne also provides, under contract to Lockheed Martin, the auxiliary engines on Orion’s service module, reaction control thrusters on the crew module, OMS-E refurbishment services and the jettison motor on the spacecraft’s launch abort system. Orion’s auxiliary engines and reaction control thrusters are produced at Aerojet Rocketdyne’s facility in Redmond, Washington. The jettison motor is a combined effort of the company’s facilities in Orange, Virginia, and Huntsville, Alabama.