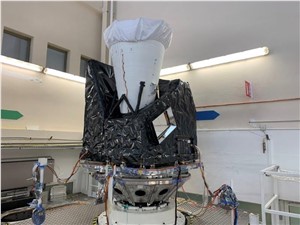 After many technical and programmatic challenges, the first satellite of the next generation of the Meteosat family has taken a major step towards its first flight, currently scheduled for launch in autumn 2022.

Following on from the success of the first and second generation of Meteosat satellites, the Meteosat Third Generation (MTG) will soon take over the reins to ensure the continuity of data for weather forecasting for the next two decades.

The new generation of weather satellites will offer a significant enhancement of the current imager capabilities provided by the Meteosat Second Generation, a real-time lightning imaging and an all-new infrared sounding capability for early detection of severe storms.

Following the completion of the first flight model of the Flexible Combined Imager (FCI) in July of this year, the instrument has now been successfully mounted onto the protoflight platform and the combined assembly is now being prepared for the Satellite Thermal Vacuum campaign, which is scheduled to start in early October in Cannes, France.

This test will demonstrate the correct functioning of the satellite in the simulated thermal conditions seen in flight.

Prior to this, the Flexible Combined Imager, developed by Thales Alenia Space, had undertaken an extensive system and environmental test campaign, which concluded with the complex ‘Optical Vacuum’ performance testing which measured all the critical optical and radiometric characteristics of the instrument. The testing confirmed the expected state-of-the-art performance of the instrument.

In parallel, the three-axis stabilised platform, developed by OHB in Bremen, had also undertaken extensive system testing demonstrating the platform’s performance and associated data handling links with the instruments.

The platform had also participated in the System Validation Test (SVT) where it was successfully commanded from both Telespazio (demonstrating the nominal Launch and Early Orbit phase sequence) and Eumetsat, the European Organisation for the Exploitation of Meteorological Satellites, (for routine operations).

ESA’s Meteosat Programme Manager, Paul Blythe, commented, “It is very pleasing to see the significant progress that has been made over the last couple of years, despite the many technical and programmatic challenges encountered. Both the industrial consortium and ESA teams should be very proud of what has been achieved particularly when considering the unprecedented constraints brought by the Covid crisis.

“The performance results recently measured for the protoflight Flexible Combined Imager are truly impressive and reaffirm the world class capabilities that the European industry has to offer. I very much look forward to the launch of the MTG-I1 satellite at the end of next year, which will begin the deployment of the 'Third Generation' of geostationary meteorological observing capabilities.”

The first MTG-S satellite is also progressing well and is on track for launch readiness towards the end of 2023. Developed by OHB, the Infrared Sounder is under final assembly in Munich, and is scheduled for instrument mechanical testing towards the end of this year.

MTG is a cooperation between ESA and Eumetsat. ESA is responsible for the definition and implementation of the MTG satellites and procurement of recurrent hardware, while Eumetsat is in charge of operating the spacecraft throughout its lifetime. The MTG satellites will replace the current Meteosat Second Generation (MSG) operational system for which the first of four satellites were launched in 2002, and the last in 2015.