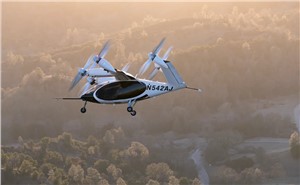 A Part 135 Air Carrier Certificate is required for Joby to operate its revolutionary aircraft as an air taxi service in cities and communities around the United States. Alongside a Type Certificate and Production Certificate, this is one of three regulatory approvals critical to the planned launch of Joby’s all-electric aerial ridesharing service in 2024.

The Company is now in the first of five stages necessary for Joby to achieve Part 135 certification in 2022. It expects to start the next stage of the process in August, with the submission of additional application materials including the full complement of airline operating manuals. Once that documentation is approved, the FAA will visit Joby locations to observe training sessions and witness flight operations before issuing its final approval.

As Joby’s all-electric vertical take-off and landing (“eVTOL”) aircraft is not expected to receive its type certification until 2023, the company intends to operate traditional, existing, certified aircraft under the Part 135 air carrier certification from 2022 before adding the Joby aircraft to the airline operating certificate once it is certified.

The process is led by Joby’s Head of Air Operations, Bonny Simi, an aviation executive who held key operational and strategic positions at JetBlue Airways as it underwent a period of rapid growth. Simi also has over 30 years of experience as an airline pilot at JetBlue and United Airlines.

“We’re excited to reach this milestone on the path toward becoming the first eVTOL airline in the world,” said Simi. “We look forward to working closely with the FAA as we prepare to welcome passengers to a new kind of air travel — one that is environmentally friendly, quiet enough to operate close to cities and communities, and will save people valuable time.”

Joby’s air operations team includes numerous aviation industry veterans with extensive experience, including Kellen Mollahan, a former MV-22 pilot with the U.S. Marine Corps, as assistant director of operations; Matthew Lykins, an expert maintenance safety inspector and auditor, avionics technician and pilot with more than 30 years of experience, as director of maintenance; Peter Wilson, former lead test pilot for the F-35B program with more than 35 years of flight test and instructor experience, as director of flight standards and training; and Jill Wilson, an aviation safety leader who has held roles at Embraer, XO Jet and Cape Air.

Joby’s all-electric aircraft is designed to transport a pilot and four passengers with zero operation emissions. The aircraft has a range of 150 miles, can travel at speeds up to 200 mph and has a revolutionary low noise footprint.

Last year, Joby agreed to a “G-1” certification basis with the FAA for its aircraft in line with existing Part 23 requirements for Normal Category Airplanes, with special conditions introduced to address requirements specific to Joby’s unique aircraft. In line with this certification approach, Joby will employ commercial airline pilots licensed under existing FAA regulations to fly its passenger service.

In February 2021, Joby announced its intention to merge with Reinvent Technology Partners (“Reinvent” or “RTP”) (NYSE:RTP), a special purpose acquisition company that takes a “venture capital at scale” approach to partnering with bold leaders and companies. RTP announced that an Extraordinary General Meeting of Shareholders has been scheduled for August 5, 2021 to vote on the approval and adoption of RTP’s business combination with Joby.