Two sites surpassed major milestones in July, with one shipping the 100,000th CMC turbine shroud and the other the 100,000th fuel nozzle tip 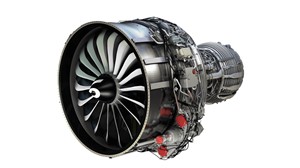 Both parts are made for the CFM LEAP engine, which entered revenue service in 2016 and surpassed 10 million flight hours earlier this year. The fleet is providing operators with 15% better fuel efficiency than previous generation engines. Each engine has 18 shrouds and 18 or 19 fuel nozzles, depending on the specific model.

In Asheville and Auburn, GE Aviation employees helped establish new processes to mass produce parts with CMC materials and additive methods, then scaled the technology over time, while improving and maintaining production quality.

"We're proud to deliver our 100,000th CMC turbine shroud in support of the LEAP engine," said Ed Orear, composites general manager for GE Aviation. "This milestone is a testament to GE Aviation's commitment to produce the leading aviation materials technologies. This achievement could not have happened without the great production teams in Asheville and Huntsville, supported by GE's incredible engineering teams at GE Aviation and GE Research."

Additive manufacturing involves using computer-aided designs to "print" a metal part from powder, layer by layer. Unlike traditional manufacturing methods that mill or cut away from a slab of metal to produce a part, additive manufacturing (also known as 3D printing) grows parts directly from a CAD file using layers of fine metal powder and an electron beam or laser. The resulting part is lighter weight with less waste, manufactured in a fraction of the time it would take using traditional methods.

“We opened the industry’s first site for mass production using the additive manufacturing process, and to achieve this milestone affirms our plans and investments were on target,” said Eric Gatlin, additive general manager for GE Aviation. “There is a bright and exciting future for this technology.”