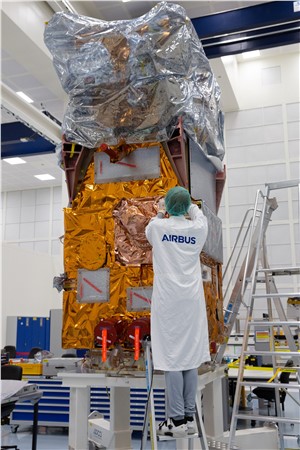 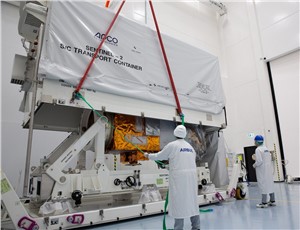 Airbus has finished the integration of the Copernicus Sentinel-2C satellite. It is the third of its kind and will now be shipped to Munich to undergo extensive environmental tests to prove its readiness for space. The test campaign will last until March 2022.

Offering "colour vision" for the Copernicus programme, Sentinel-2C – like its precursor satellites Sentinel-2A and -2B – will deliver optical images from the visible to short-wave infrared range of the electromagnetic spectrum. From an altitude of 786 kilometres, the 1.1 ton “C” satellite will enable continuation of imaging in 13 spectral bands with a resolution of 10, 20 or 60 metres and a uniquely large swath width of 290 km.

The telescope structure and the mirrors are made of silicon carbide, first pioneered by Airbus to provide very high optical stability and minimize thermo-elastic deformation, resulting in an excellent geometric image quality. This is unprecedented in this category of optical imagers. Each Sentinel-2 satellite collects 1.5 terabytes per day, after on-board compression. The data is formatted at high speed and temporarily stored on board in the highest capacity Mass Memory and Formatting unit currently flying in space. Data recording and laser-enabled downlink can take place simultaneously at high speed via the EDRS SpaceDataHighway, in addition to the direct X-band link to the ground stations.

The Sentinel-2-mission is based on a constellation of two identical satellites, Sentinel-2A (launched 2015) and Sentinel-2B (launched 2017), flying in the same orbit but 180° apart for optimal coverage and revisit time. The satellites orbit the Earth every 100 minutes covering all Earth’s land surfaces, large islands, inland and coastal waters every five days.