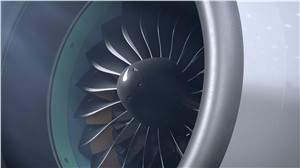 “The GTF engine family has proven to be the most environmentally sustainable powerplant for the current generation of single-aisle aircraft,” said Geoff Hunt, senior vice president of engineering and technology at Pratt & Whitney. “At Pratt & Whitney, we’re working towards becoming the best aerospace company for the world and with the revolutionary GTF engine family, we’re just getting started.”

The unique geared fan architecture of the GTF engine is core to Pratt & Whitney’s strategy to develop more sustainable propulsion systems, which will enable the industry to reach its ambitious environmental goals in the coming decades. Through higher bypass ratios, more advanced materials and hybrid-electric configurations, the company sees considerable potential to continue lowering fuel burn, carbon emissions and noise. The company is also working in concert with industry regulatory authorities to develop technical standards that will enable to the use of 100% Sustainable Aviation Fuel (SAF).

Since entering service in early 2016, the GTF engine family has delivered on its promised ability to reduce fuel burn and carbon emissions by up to 20 percent, noise footprint by 75 precent and regulated emissions by 50 percent to the CAEP/6 regulatory standard. The engine’s unique geared fan is the right architecture for the future with a long runway for further development. Pratt & Whitney is committed to continuing to invest in evolving propulsion systems to power the next generation of commercial aircraft.

Tell a friend:
P&W GTF Engines Save Half a Billion Gallons of Fuel and 5 Million Tonnes of Carbon Emissions