The Sky is Not the Limit 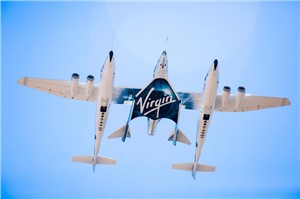 Headlines around the world are billing it as the beginning of a new era in space tourism.

On Sunday, July 11, Virgin Group founder Sir Richard Branson soared to the edge of space, some 53 miles into the skies above New Mexico. The first leg of this remarkable journey – the first 45,000 feet or so – was aboard a carrier aircraft called WhiteKnightTwo (WK2) powered by four Pratt & Whitney Canada PW308 engines.

Two-Stage Flight
Branson’s undertaking has been 17 years in the making, and Sunday’s flight – the first in a new era of space tourism – followed numerous test flights and massive investments by the billionaire to achieve his childhood dream. The flight involved two aircraft: the WK2 carrier aircraft and the much smaller, passenger-carrying SpaceShipTwo, which detached from the carrier around 45,000 feet and then, under power of its own rocket engine, flew vertically into the atmosphere, plateauing at around 300,000 feet.

Both aircraft later glided back to Earth and into graceful landings at Spaceport America, New Mexico.

“Congratulations Virgin Galactic and Sir Richard Branson, and congratulations to our team on the successful flight of #Unity22 powered in part by our Pratt & Whitney Canada PW308 engines,” said Maria Della Posta, president, Pratt & Whitney Canada. “We are excited to help write this newest chapter in aviation history and demonstrate the mission versatility of our engines for commercial space flight.”

When Pratt & Whitney Canada unveiled the PW300 engine in 1985 at the National Business Aviation Association’s annual event there was much speculation on how it would forever change business aviation, and change it, it did. Few, however, envisioned the day when it would be used to launch intrepid travellers into space.

One of the greatest strengths of our engines is versatility and the ability to serve diverse missions. The PW308 engine, the most powerful of the PW300 turbofan family, powers the Hawker 4000 and Dassault Falcon 2000 business jets. Branson’s team chose the PW308 engine “as the best, most reliable solution available today to help make our aerospace adventure a true success.”  The PW300 engine family has flown some 23 million hours with an excellent performance record.

While the Virgin Galactic team rocketed toward space on Sunday, our Pratt & Whitney team, dedicated to this endeavor for many years, was glued to this flight’s global livestream event. For more than 10 years, our team worked hand-in-hand with Branson’s crew at Virgin Galactic to attend to every detail. Sunday’s flight was their victory too and, as with so many fellow employees before them, they helped write another exciting chapter for aviation and for Pratt & Whitney.

With this first flight under its belt, Virgin Galactic plans to begin selling seats on SpaceShipTwo in 2022.