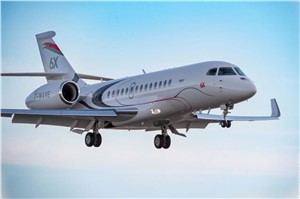 Falcon 6X s/n 003 is fitted with a full interior and will be used for cabin design validation. The aircraft completed a two-hour maiden flight from Dassault’s Bordeaux-Mérignac final assembly plant to its Istres flight test facility on June 24, climbing to Flight Level 400 and accelerating to a cruise speed of Mach 0.85. The first 6X flew on March 10 and the second on April 30.

Aircraft no. 3 is outfitted with the Falcon 6X’s award winning interior, including in-flight entertainment and communications systems. In addition to testing this equipment, the aircraft will be used to evaluate environmental features and temperature control and validate cabin acoustics systems, which alongside those on the ultra long-range Falcon 8X trijet are expected to be the industry reference.

A fourth aircraft will also be equipped with a full cabin interior, currently being installed in Mérignac. It will conduct a two-month global endurance flight campaign intended to ensure that all 6X systems are fully mature upon entry into service.

Production of additional units is in full swing, with aircraft no. 10 scheduled to be on the final assembly line by beginning of July.
The Falcon 6X has received several prestigious design awards, including the Red Dot prize for premium cabin design. The aircraft was recognized this month as the “Best of the Best” in aviation by the Robb Report luxury-lifestyle magazine, which noted: “Dassault’s newest aircraft pairs size with technology to create an award-worthy new class of business jet.”