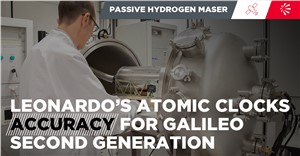 The European Commission and the European Space Agency (ESA) have selected Leonardo’s hydrogen atomic clocks for Galileo Second Generation, the EU’s satellite navigation system, which has been developed by ESA and the European industry. The Company has signed a contract with ESA for the direct supply of the PHM (Passive Hydrogen Maser) for the new 12 satellites.

Leonardo's PHM is the most accurate atomic clock ever made for space applications: it accumulates an error of one second every three million years, and is a crucial contributor to Galileo’s superior ground accuracy of about 30 cm. Further to the development of more than 70 clocks for the first generation of Galileo, Leonardo will provide two masers for each new satellite. The first twelve units will be delivered in 2023.

The Company will also make available its skills for in orbit support: a highly qualified team will be able to provide assistance and advice to the EU Agency for the Space Programme (EUSPA), the exploitation manager of Galileo in analysing the instruments operation, thus improving customer support services for European partners.

"We thank the European Commission and ESA for the trust they have renewed in our Company, as they chose us also for the Second Generation of such a fundamental programme for Europe. Proud of this success, we are constantly working to develop more and more compact, accurate and high performing clocks for satellite navigation on our planet and, one day, on the Moon or on Mars”, stated Giovanni Fuggetta, Head of the Business Space Area in Leonardo Electronics Division.

For the construction of the new atomic clocks, produced in the Nerviano plant (Milan), Leonardo will increase the production capacity of the area dedicated to their development: it will expand the space with two shielded areas, two external thermo-vacuums, an area for clocks’ ground storage, and one dedicated to the testing and integration of electronic boards, to guarantee the production of two clocks every six weeks. This is based on the "lean manufacturing" approach, therefore on waste minimisation in favour of the efficiency and sustainability of production. This is in line with the strategic plan "Be Tomorrow - Leonardo 2030", which has among its objectives the development of an industry 4.0 ready to face the challenges of the future, also through the digitization of systems and the use of artificial intelligence.