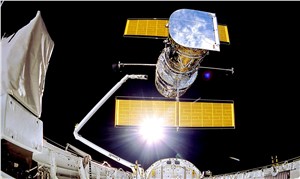 NASA is working to resolve an issue with the payload computer on the Hubble Space Telescope. The computer halted on Sunday, June 13, shortly after 4 p.m. EDT. After analyzing the data, the Hubble operations team is investigating whether a degrading memory module led to the computer halt. The team is preparing to switch to one of several backup modules on Wednesday, June 16. The computer will then be allowed to run for approximately one day to verify that the problem has been solved. The team would then restart all science instruments and return the telescope to normal science operations.

The purpose of the payload computer is to control and coordinate the science instruments onboard the spacecraft. After the halt occurred on Sunday, the main computer stopped receiving a “keep-alive” signal, which is a standard handshake between the payload and main spacecraft computers to indicate all is well. The main computer then automatically placed all science instruments in a safe mode configuration. Control center personnel at NASA’s Goddard Space Flight Center in Greenbelt, Maryland restarted the payload computer on Monday, June 14, but it soon experienced the same problem.

The payload computer is a NASA Standard Spacecraft Computer-1 (NSSC-1) system built in the 1980s. It is part of the Science Instrument Command and Data Handling module, which was replaced during the last astronaut servicing mission in 2009. The module has various levels of redundancy which can be switched on to serve as the primary system when necessary.