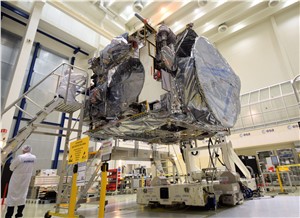 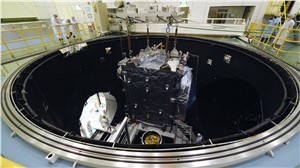 The Jupiter Icy Moons Explorer has moved into the ‘Large Space Simulator’ at ESA’s test centre, ready for grueling environmental tests at a range of temperatures.

Since arriving at ESA’s European Space Research and Technology Centre (ESTEC) in April, a number of activities have taken place ahead of the environmental testing. This included the application of multi-layered insulation, a deployment test of the medium-gain antenna, and other preparatory activities – captured in the image gallery below.

Once the door of the Large Space Simulator (LSS) is sealed, Juice will spend several weeks being subjected to extreme heating and cooling cycles under vacuum, to confirm the spacecraft is ready for its long journey through the Solar System to Jupiter. Juice will experience highs of 250ºC close to Venus, and lows of around -180ºC in the Jovian system.

Juice will remain at ESTEC until July, before being transported to Toulouse for its final round of tests. From there it will travel to Europe’s Spaceport in French Guiana, to be launched on an Ariane 5 rocket next year.

Once in the Jovian system the mission will make detailed observations of the giant gas planet and its three large ocean-bearing moons – Ganymede, Callisto and Europa – with a suite of remote sensing, geophysical and in situ instruments. The mission will investigate the emergence of habitable worlds around gas giants and the Jupiter system as an archetype for the numerous giant exoplanets, now known to orbit other stars.