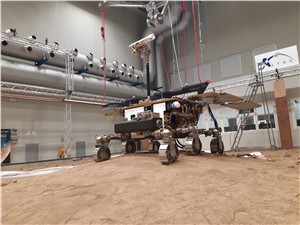 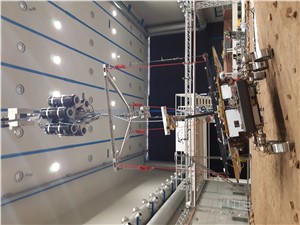 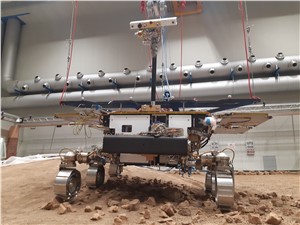 The replica ExoMars rover that will be used in the Rover Operations Control Centre to support mission training and operations is fully assembled and has completed its first drive around the Mars Terrain Simulator at ALTEC, in Turin, Italy.

The rover ‘Ground Test Model’ (GTM) will play a critical role in the coming months as rover operators prepare for Rosalind Franklin’s arrival in Oxia Planum on Mars in June 2023.

The GTM already completed important commanding tests while stationary in the Thales Alenia Space cleanroom, and now it has been fully assembled in the Mars Terrain Simulator.

To best represent what the real Rosalind Franklin rover will experience on Mars, the GTM is supported by a device to recreate the martian gravity level. Mars gravity is about one-third of Earth’s so two-thirds of the rover’s 290 kg total mass is absorbed by the ‘Rover Unloading Device’ attached to the GTM from the ceiling of the test area.

Rover operators will rehearse numerous activities with the replica rover, from moving across different terrain to deploying its science instruments.

The first tests were simple driving activities: moving over different surfaces, tackling a side slope, small hill, and boulder-strewn terrain. On top of the hill, the rover was also commanded to take a panoramic image sequence.

The test paves the way for more advanced activities in the coming months. For example, while the first driving test was executed by following direct drive commands, upcoming is a trajectory control test: that is, the rover will automatically correct deviations induced by the topography and roughness of the terrain to stay within 20 cm of the commanded path. Later, more advanced autonomous driving functions will be tested whereby the rover will use onboard computing capabilities to assess the safety of the terrain on its own.

The GTM will also be used in the coming weeks for drilling activities. The ExoMars rover is unique in Mars exploration in that it will be first to drill 2 m below the martian surface to retrieve samples for analysis in its sophisticated onboard laboratory. Underground samples are more likely to include biomarkers, since the tenuous martian atmosphere offers little protection from radiation and photochemistry at the surface. Understanding if life once existed on Mars is a key question in planetary science, and at the heart of the ExoMars programme.

The Rover Operations Control Centre (ROCC) is hosted by ALTEC in Turin, Italy.