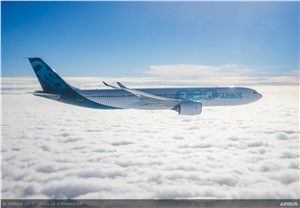 Cleaner & more efficient: the A330neo first to receive green-light for post-2028 environmental regulations
The A330-900 (Neo) has become the first large airliner to be certified by *EASA for *ICAO’s new CO2 emissions standard. With this milestone, not only is Airbus the first manufacturer to receive such certification for any commercial aircraft world-wide, but this also demonstrates that the aircraft which Airbus produces today, and will continue to produce well into the future, will comply with foreseeable CO2 regulations.

The new requirement, adopted in 2017, has been developed by the UN’s ICAO Committee on Aviation Environmental Protection (CAEP) and is now being cascaded to certifying airworthiness authorities worldwide. Moreover, it complements existing aircraft noise and engine emissions standards and will be applicable both to New Type-Certified aircraft and to In-Production aircraft. By January 2028 all aircraft being produced will need to comply with the ICAO CO2 standard. Existing in-service aircraft, meanwhile, are being covered by separate environmental measures.

Simone Rauer, Airbus’ Head of Aviation Environmental Roadmap commented: “Airbus is proud to be the first commercial aircraft manufacturer to receive EASA certification for ICAO’s new CO2 emissions requirement. ICAO standards are important elements of the global ICAO action plan to regulate emissions from aircraft and engines and to help ensure a level playing-field in the industry.” She adds: “For the A330neo in particular this award demonstrates that this aircraft meets ICAO’s environmental regulations beyond 2028.”

‘Technologically-encouraging’ and complementary to other ICAO and EASA environmental measures for aviation
Furthermore, ICAO standards such as this one are ‘technology-encouraging’ and are based on demonstrated and proven technologies which can be inserted into the next generation of aircraft. Moreover, this particular one is an important new ‘brick’ to complement a range of existing ICAO measures which help to control and curb the emissions which are attributed to civil aviation. Such other measures also include sustainable aviation fuels as well as market-based incentives including ICAO’s *CORSIA -- Annex 16 Volume 4 carbon offsetting mechanisms for operational CO2 emissions etc.

It should be noted that only 12% of the world fleets today comprise the latest generation of aircraft, so there is still a great deal of CO2 emissions reductions which can be achieved simply via large scale fleet renewals with new-generation aircraft like the A220, A320neo, A321neo, A330neo and A350 families.

The CO2 certification of the current product lines (such as the Airbus aircraft types listed above, plus the latest aircraft from other OEMs) is foreseen to be one of the key pillars of the forthcoming EASA Environmental Label (encompassing in addition to CO2, noise and local emissions certification standards) in order to convey the environmental product performance of new-generation aircraft.