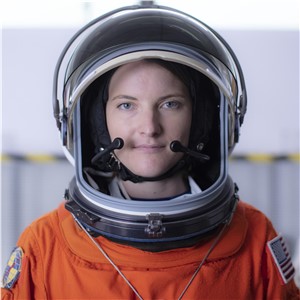 NASA has assigned Kayla Barron to serve as a mission specialist for the agency’s SpaceX Crew-3 mission to the International Space Station, which is targeted to launch as early as Oct. 23.

This will be the first spaceflight for Barron, who became a NASA astronaut in January 2020 after completing two years of training. She will join NASA astronauts Raja Chari and Tom Marshburn, as the mission’s commander and pilot, respectively, and ESA (European Space Agency) astronaut Matthias Maurer, who also will serve as a mission specialist.

This will be the third crew rotation mission on SpaceX’s human space transportation system and its fourth flight with astronauts, including the Demo-2 test flight, to the space station through NASA’s Commercial Crew Program.

Barron was born in Pocatello, Idaho, but considers Richland, Washington, her hometown. She earned a bachelor’s degree in systems engineering from the U.S. Naval Academy in Annapolis, Maryland, in 2010. She earned a master’s degree in nuclear engineering from the University of Cambridge, in England, in 2011, as Gates Cambridge Scholar. Lt. Cmdr. Barron earned her submarine warfare officer qualification and deployed three times while serving aboard the USS Maine. At the time of her selection as an astronaut candidate in 2017, she was serving as the flag aide to the superintendent of the U.S. Naval Academy.

When Barron, Chari, Marshburn, and Maurer arrive at the orbiting laboratory, they will become expedition crew members for the duration of their six-month science mission. The crew will have a slight overlap with the Crew-2 astronauts, who arrived April 24. This will mark the second time commercial crew missions have overlapped on the station. The Crew-1 astronauts, who ended their mission with a splashdown off the coast of Panama City, Florida, on Sunday, May 2, were aboard the station with the Crew-2 astronauts for a seven-day direct crew handover. Increasing the total number of astronauts aboard the station enables the agency to boost the number of science investigations conducted in the unique microgravity environment.