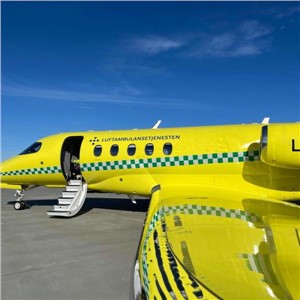 Babcock Norway has been awarded a new contract to provide a round the clock fast jet air ambulance service to the rescEU scheme.

The new contract will see Babcock provide a fast jet air ambulance capability across the EU including aircraft maintenance, the provision of personnel and their training. The contract will use a new Cessna C680A Latitude aircraft, the same model that is already in use for Babcock’s existing fixed-wing air ambulance contract in Norway.

The new jet will be stationed at Babcock’s base in Tromsø so that when the aircraft is not being used for missions across the EU, it can be deployed as part of the regular air ambulance fleet for Babcock Norway, further strengthening preparedness in northern Norway and on Svalbard.

Upon signing the contract, Øyvind Juell, CEO of National Air Ambulance Services of Norway, who put the contract out to tender, stated that:

“Having the same provider of air ambulance services throughout the country is beneficial for several reasons. Among other things, it provides a more robust access to crew in the event of illness and other absences. Babcock is a well-known ambulance aircraft supplier that we know provides high quality services and systems.”