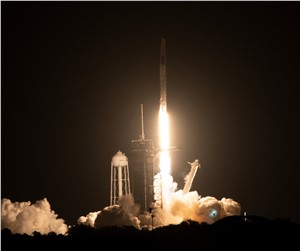 The crew spent around 23 hours orbiting Earth and catching up with the International Space Station after their launch on 23 April at 10:49 BST (11:49 CEST, 05:49 local time).

Thomas is the first ESA astronaut to fly in space in a vehicle other than the Russian Soyuz or the US Space Shuttle, and the first ESA astronaut to leave Earth from Florida, USA, in over a decade. This is his second flight, his first mission called Proxima saw Thomas fly to the Space Station on a Soyuz from Baikonur in Kazakhstan and his expedition broke records for amount of hours spent on research at the time.

Bigger and better
For Alpha everything is set to be bigger and better. The new Crew Dragon ships four astronauts at a time allowing for more people to live and work on the International Space Station doing more research for scientists on Earth.

A Russian laboratory module is set to arrive in the summer with a European robotic arm that will offer more ways of maintaining the International Space Station and support spacewalkers as they work outside. Thomas will help in setting up the arm and preparing it for use during the Alpha mission.

Faster and smarter
As the new crew arrived on the International Space Station through a commercial spaceflight, the Station itself is offering further commercial access to space.

“I salute Thomas and the crew as they embark on another six-month adventure of work and science in space,” says ESA’s Director General Josef Aschbacher, “the Alpha mission is a testament to what we can do in international, governmental and commercial collaboration.

“There are three European commercial services offering facilities for organisations to run their own experiments cheaply and quickly in humankind’s unique laboratory in space, both inside and out, your experiment could be flying in just six months’ time.”

Over 200 experiments are planned during Thomas’ time in space, with 40 European ones and 12 new experiments led by the French space agency CNES.

At the end of the Alpha mission in October, Thomas is slated to take over commandership role of the International Space Station for a brief period and welcome ESA astronaut Matthias Maurer on his first flight to space.