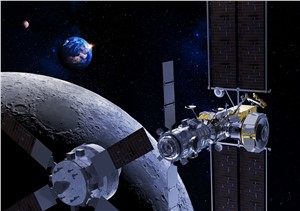 Thales Alenia Space, the joint company between Thales (67%) and Leonardo (33%), has won a contract from the Italian space agency (ASI) to conduct a feasibility study of 16 design concepts to support a human presence on the Moon. ASI's initiative is part of a strategic partnership with NASA within the scope of the ARTEMIS program for the human exploration of the Moon, including both lunar orbit and lunar surface.

These studies could well underpin a roadmap for Italian participation in the lunar program – and even the development of a sustainable lunar economy.

In particular, the studies will be focusing on the Shelter, a pressurized lunar surface module to be used by astronauts in an emergency and also as a starting point for surface exploration, as well as on a lunar telecommunications system to facilitate communications between the lunar base, the Lunar Gateway space station and Earth.

Other aspects to be studied include pressurized surface modules such as a lunar laboratory for scientific experiments, a new-generation pressurized observation dome on Gateway and a habitation module for astronauts. Transport systems will be considered as well, to help astronauts explore the lunar surface or transport equipment to Gateway and the lunar surface, and even an automated rover to transport raw materials. Infrastructures needed for the future lunar base include a Lunar Data Center and a power generation and distribution facility.

Thales Alenia Space’s selection as a partner in the Artemis program reflects its strategic vision. Following the Low Earth and Lunar Orbits, the development of lunar surface modules is a new challenge that paves the way for joint governmental and commercial projects that will continue for the next 30 years.

Artemis: heading to the Moon in 2024!
The Artemis program will be implemented in three phases: Artemis 1, an unmanned flight to test the launch system and Orion spacecraft; Artemis 2, Orion's first manned flight; and Artemis 3, to put astronauts on the Moon in 2024. The program is designed to install sustainable structures on the Moon and in lunar orbit to support further human exploration of the surface and conduct scientific studies. The Lunar Gateway will be a key part of the program, since it will be used as an outpost for astronauts on their way to the Moon, and as a laboratory for scientific research, thus supporting the development of sustainable lunar exploration by the end of the decade.

Lunar Gateway
The lunar space station, Gateway, is one of the pillars of NASA's Artemis program, supporting sustainable exploration on the Moon and beyond. It is a joint international program, currently involving NASA (USA) and ESA (Europe). The Gateway, weighing about 40 metric tons, will be automatically assembled piece by piece and will be placed in a “near rectilinear halo orbit” (NRHO) around the Moon. It will mainly comprise living quarters for the crew, power and propulsion system, logistics and communications modules, a robotic arm and docking modules. It is not designed for permanent occupation but will accommodate crews of up to four astronauts for one to three months. Gaining new experience around the Moon will prepare NASA to send the first humans to Mars as from 2030 – and the Gateway will play a key role in this process.

Thales Alenia Space’s role in the Lunar challenge
Thales Alenia Space, already responsible for the thermomechanical systems on the European service module for Orion, is heavily involved in the European Space Agency's contribution to the Gateway with ESPRIT and I-HAB. It is also involved in NASA's Human Landing System (HLS), as part of the consortium led by Dynetics, recently selected by NASA, as well as on the Viper rover that NASA will send to the Moon's South Pole in search of water. For Northrop Grumman, Thales Alenia will develop the pressurized module for HALO (Habitation And Logistics Outpost), one of the first two elements of the Lunar Gateway, to be launched by the end of 2023. Thales Alenia Space’s plant in Turin recently carried out the initial welding operations for this module.