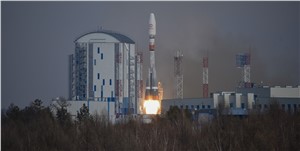 Soyuz begins its ascent from Russia’s Vostochny Cosmodrome on this morning’s mission to deploy 36 more satellites for OneWeb’s connectivity constellation.

Arianespace kicked off its 2021 launch activity with another deployment of 36 constellation satellites at the service of OneWeb, continuing support for this operator’s ultimate ambition of bringing space down to Earth for the benefit of all.

The latest cluster of spacecraft – produced by the OneWeb Satellites joint venture of OneWeb and Airbus – was released into a circular low-Earth orbit during a flight lasting 3 hours and 51 minutes from liftoff at Russia’s Vostochny Cosmodrome to final payload separation. Total lift performance was estimated at 5,803 kg.

Soyuz rises to the occasion
After an initial powered phase of Soyuz’ three lower stages, the mission included multiple powered phases of the re-ignitable Fregat upper stage to place its 36 passengers at their targeted deployment points. Designated Flight ST30, this was Arianespace’s 30th “ST” launch (which is the launcher designation for missions performed with the Starsem affiliate) and the second originating from Vostochny Cosmodrome (with liftoff coming at 11:47 a.m. local time).

The Soyuz 2-1b launcher version utilized for Flight ST30 is the result of a joint European/Russian upgrade program, adding a more powerful third stage engine that significantly increases the launcher’s overall performance.

To accommodate up to 36 OneWeb satellites on a single launch, Arianespace/Starsem utilizes a payload dispenser system that was developed and produced by prime contractor RUAG Space AB of Linköping, Sweden.

Arianespace’s fifth mission for OneWeb since 2019
Today’s mission success marked Arianespace’s fifth launch at the service of OneWeb, with a total of 146 satellites now delivered to orbit. The initial six spacecraft were lofted by Arianespace from French Guiana in February 2019.

This was followed by three missions in 2020: February and March flights conducted by Arianespace and Starsem from Baikonur Cosmodrome carrying a total of 68 satellites; while a December mission delivered 36 more on the first commercial flight from Vostochny Cosmodrome.

OneWeb’s total constellation of 650 satellites will deliver high-speed, low-latency enterprise-grade connectivity services to a wide range of customer sectors including enterprise, government, maritime and aviation customers. Once deployed, it will enable user terminals are capable of offering 3G, LTE, 5G and Wi-Fi coverage.

Soyuz and the Arianespace launcher family
Soyuz is the medium-lift member of Arianespace’s launcher family, which also comprises the heavy-lift Ariane 5 and lightweight Vega. Including Flight ST30, the company has now performed a combined total of 325 missions using these three vehicles.

Up next in Arianespace’s launch calendar is Vega Flight VV18 from the Spaceport in French Guiana.