Nuclear Propulsion Could Help Get Humans to Mars Faster 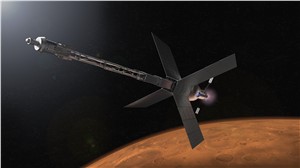 As NASA’s Perseverance rover homes in on the Red Planet, engineers on the ground are furthering potential propulsion technologies for the first human missions to Mars. NASA is looking at two types of nuclear propulsion systems – nuclear electric and nuclear thermal propulsion.

Nuclear electric propulsion systems use propellants much more efficiently than chemical rockets but provide a low amount of thrust. They use a reactor to generate electricity that positively charges gas propellants like xenon or krypton, pushing the ions out through a thruster, which drives the spacecraft forward. Using low thrust efficiently, nuclear electric propulsion systems accelerate spacecraft for extended periods and can propel a Mars mission for a fraction of the propellant of high thrust systems.

Nuclear thermal propulsion technology provides high thrust and twice the propellant efficiency of chemical rockets. The system works by transferring heat from the reactor to a liquid propellant. That heat converts the liquid into a gas, which expands through a nozzle to provide thrust and propel a spacecraft.

“While NASA’s immediate priority is returning humans to the Moon with the Artemis program, we are also investing in ‘tall pole’ technologies that could enable crewed missions to Mars,” said Jim Reuter, associate administrator of NASA’s Space Technology Mission Directorate (STMD). “We look forward to seeing what innovations industry offer in nuclear propulsion as well as fission surface power via a forthcoming request for proposals for that technology."

Human Missions to Mars
To date, only robotic explorers have traveled to Mars, without the need for returning to Earth. Waiting for optimal planetary alignment for the return trip would require astronauts to loiter at Mars for more than a year, stretching the round-trip mission to more than three years.

NASA’s goal is to minimize the time the crew travels between Earth and Mars to as close to two years as is practical. Space nuclear propulsion systems could enable shorter total mission times and provide enhanced flexibility and efficiency for mission designers.

To keep the round-trip crewed mission duration to about two years, at a minimum, NASA is looking at nuclear-enabled transportation systems to facilitate shorter-stay surface missions. The systems would take advantage of optimal planetary alignment for a low-energy transit for one leg of the trip and the new technology’s enhanced performance to make the higher-energy transit for the other leg.

Nuclear electric propulsion builds on NASA’s work maturing solar electric propulsion thrusters and systems for Artemis, as well as the development of fission power for the lunar surface. Significant investment has also been made in relevant fuel and reactor technologies for small, terrestrial reactors that could be adapted to space reactors to power electric propulsion. The U.S. government’s aim to establish a fuel fabrication capability has a range of applications, including nuclear propulsion and fission surface power.

NASA, in partnership with DOE, is developing and testing new fuels that use low-enriched uranium for space applications to see how they perform under the extreme thermal and radiation environments needed for nuclear thermal propulsion. NASA is working closely with DOE, industry, and universities to put fuel samples in research reactors at Idaho National Laboratory's Transient Reactor Test (TREAT) facility and the Massachusetts Institute of Technology Nuclear Reactor Laboratory for nuclear testing. The team is also performing non-nuclear testing in simulated reactors at Marshall test facilities.

While most of the engine operates at modest temperatures, materials in direct contact with the reactor fuel must be able to survive temperatures above 4,600 degrees Fahrenheit. NASA and DOE have been working with industry on a viable approach, and industry will now develop preliminary designs to meet this challenge.

Technology Infusion
“We’re exploring both nuclear electric and nuclear thermal propulsion options for crewed Mars missions,” Calomino said. “Each technology has its unique advantages and challenges that need to be carefully considered when determining the final preference.”

Whichever propulsion system is ultimately chosen, the fundamentals of nuclear propulsion can enable robust and efficient exploration beyond the Moon. NASA will continue to develop, test, and mature various propulsion technologies to reduce risk and inform the Mars transport architecture.

Tell a friend:
Nuclear Propulsion Could Help Get Humans to Mars Faster