With this historical contract, Thales Alenia Space confirms its position as the industrial benchmark in global satellite constellations offering the world's most efficient services for mobile connectivity (maritime, in-flight), backhauling of 4G and 5G communications, government networks and enterprise communications. 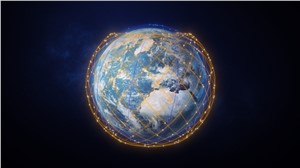 Thales Alenia Space, a joint venture between Thales (Euronext Paris: HO)  (67%) and Leonardo  (Milan stock exchange: LDO) (33%), has signed an agreement with leading global satellite operator Telesat to be the prime contractor on the construction of Lightspeed, its advanced LEO network, a multi-billion dollar project initially comprised of a fleet of 298 satellites.

This agreement has been signed in the presence of Bruno Le Maire, Minister of the Economy, Finance and Recovery of France.

Following the intense work done on Lightspeed’s innovative design, this selection represents a major step in the deployment of the project, as Telesat and Thales Alenia Space significantly increase the momentum of activities in parallel with  the finalization of the Lightspeed project’s financial close.

Telesat will rely on Thales Alenia Space not only to provide the space and mission segments, but also to be responsible for the end-to-end network performance and related specifications of the system.

Lightspeed’s space segment will initially be comprised of 298 satellites, in the 700-750 kg class. The network will deliver multiple terabits per second across the globe for secure, low-latency, high-performing broadband professional services.

Lightspeed is based on an innovative architecture and next generation technologies, providing a very high level of flexibility in capacity allocation. The constellation is built on a unique combination of advanced on-board satellite equipment – sophisticated active antennas that can dynamically refocus beams a thousand times per second, powerful and flexible processors able to address a range of bandwidth, optical laser links between satellites to create a true global mesh coverage of the world – and a mix of on-board and on-ground software ensuring the optimal use of the system resources. The flexibility brought by this system is the key to true competitiveness as it optimizes sellable capacity in relation to the location of demand, which can vary significantly across time and between hot spots such as airports and low-density areas such as remote communities. The optical laser link interconnections between the constellation satellites will provide global, mesh coverage around the world, including above the oceans and poles, with a high level of security for end-to-end services. It will optimize the ground segment with a lower number of gateway sites, more freedom on gateway locations, and the ability to deploy gateways in line with the loading of the system.

The first satellites are expected to be ready for launch in two years.

“I want to warmly thank Telesat for putting its trust in our company, and we are proud to have been selected after successfully going through a very demanding competitive process,” said Hervé Derrey, President and CEO of Thales Alenia Space. “Thales Alenia Space is mastering end-to-end flight proven systems, digitalization of payloads, inter-satellite links, management of international organization as well as industrial capabilities dedicated to constellations, and we are honored to capitalize on all this expertise to serve this major program”.

“With our design and engineering work complete, we’re excited to move forward with Thales Alenia Space as our Prime Contractor to manufacture Lightspeed, the world’s most advanced and capable LEO network, stated Dan Goldberg, President and CEO of Telesat. “Thales Alenia Space has an impressive track record and proven success in delivering innovative satellite constellations. We are grateful for the excellent work they have done to date on our project and look forward to working closely together to transform and redefine space-based communications with the Lightspeed network.”

“Telesat's Lightspeed constellation will be at the highest level of global space connectivity. I am happy with the selection of Thales Alenia Space as industrial prime contractor for this ambitious project supported by a strong partnership between France and Canada. This selection also illustrates the excellence of the French and European space industry,” said Bruno Le Maire, Minister of the Economy, Finance and Recovery of France.

Franck Riester, French Minister Delegate for Foreign Trade and Economic Attractiveness, is pleased with this major contract, which strengthens ties between France, Europe and Canada in the space sector: “In France, for the next 5 years, this contract will mobilize Thales Alenia Space, which I visited last January, as well as a large number of French companies. This reflects the quality of our industrial and technological know-how."

In connection with the agreement Thales Alenia Space and Telespazio made a capacity commitment on Lightspeed.

With GlobalStar 2, O3B and Iridium NEXT, Thales Alenia Space has  developed all of the Low and Medium Earth Orbit telecommunications constellations in full operational service today. The company has leveraged on this long-standing experience to address additional new markets such as high revisit earth observation, the surveillance of space from space, space debris tracking and the Internet of Things.