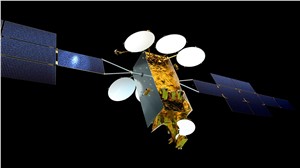 Radio frequency components are at the heart of every telecommunications satellite, and such parts are now being produced by Airbus in large volumes with innovative Additive Layer Manufacturing (ALM) technology – also known as 3D printing – for its latest spacecraft: the Eurostar Neo-series relay platform.

A total of 500 radio frequency (RF) components, composed of multi-waveguide blocks and switch assembly networks, have been 3D manufactured by Airbus Defence and Space in Portsmouth, UK for two Eurostar Neo spacecraft that will join the in-orbit fleet of Eutelsat, a major provider of satellite communications services.

Efficient production using ALM
These two satellites are called Hotbirds. They will be launched in 2021 to reinforce and enhance Eutelsat’s TV broadcasting services over Europe, the Middle East, and North Africa.

Utilising 3D printing for the Hotbirds provides major labour savings and significantly reduces the number of individual required parts, according to Gareth Penlington, the Hotbird Payload Manager at Airbus.

“This is recognised as the first large-scale deployment of RF products using the ALM process, and it puts us in an industry-leading position for the technology’s application in producing radio frequency components.” Gareth Penlington, Hotbird Payload Manager

Airbus’ manufacturing team in Portsmouth developed innovative designs for the Eurostar Neo’s multi-waveguide blocks and switch assembly networks to be 3D printed, taking them from initial concept and patenting through industrialisation and the completion of a successful qualification programme.

“This is recognised as the first large-scale deployment of RF products using the ALM process, and it puts us in an industry-leading position for the technology’s application in producing radio frequency components,” Penlington said.

The no. 1 Hotbird satellite’s communications module was transferred earlier this month from Portsmouth to the Airbus Defence and Space facility in Toulouse, France, where the spacecraft’s full build-up will be completed. Assembly of the second Hotbird communications module is now underway in Portsmouth, with its testing to begin in February.