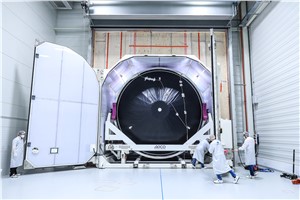 The first complete upper stage of Europe’s new Ariane 6 launch vehicle has left ArianeGroup in Bremen and is now on its way to the DLR German Aerospace Center in Lampoldshausen, Germany. Hot firing tests performed in near-vacuum conditions, mimicking the environment in space, will provide data to prove its readiness for flight.

Integrated in October last year at ArianeGroup in Bremen, Germany, this ‘hot-firing model’ of the complete upper stage is fully operational having undergone extensive functional tests. Its new reignitable Vinci engine is connected to two separate liquid hydrogen and liquid oxygen tanks and is equipped with all lines, valves and electronic and hydraulic instrumentation and control systems.

On board a barge departing from Neustadt port in Bremen on 29 January, the upper stage will journey to BadWimpfen and then be taken by road to Lampoldshausen. The DLR German Aerospace Center has already tested Ariane 6’s Vinci engine and Vulcain 2.1 liquid propulsion engines.

The complete upper stage will be installed on the new P5.2 test stand. Inside this facility all aspects of the flight are simulated including stage preparation such as the fuelling or draining of its tanks. The building has platforms that give engineers access to all parts of the stage. After final preparations, a countdown marks the start of the test.

Operations inside the P5.2 testing facility are monitored from a remote central control room. During this campaign of tests, the Vinci engine will be ignited up to four times in order to gather data describing the behaviour of the whole upper stage when the Vinci engine is running.

“We have reached another milestone in the Ariane 6 roadmap to flight. Seeing the elements of Ariane 6 coming together is very exciting. With the upcoming hot-firing tests of the complete upper stage we will gain valuable insights into the technical heart of this new European launch vehicle,” commented Daniel Neuenschwander, ESA Director of Space Transportation.

Karl-Heinz Servos, COO at ArianeGroup, added: “Completion of this stage for the first hot-fire tests is a major step for Ariane 6, for Germany and for European space as a whole.”

Walther Pelzer, Head of the German Space Agency at the German Aerospace Centre (DLR), commented: “With the first Ariane 6 upper stage hot-fire testing at the new P5.2 test facility at the DLR site at Lampoldshausen, we are now one more vital step closer to Ariane 6’s maiden flight.”

Meanwhile, a further two Ariane 6 complete upper stages are being integrated by ArianeGroup. The Combined Tests Model is intended for tests of the launch vehicle and the launch base at Europe’s Spaceport in French Guiana, and the Flight Model 1 is intended for the inaugural flight of Ariane 6.

Ariane 6 will be capable of carrying out all types of missions to all orbits thanks to its multiple reignition capability and modular design. With two versions: Ariane 62, fitted with two P120C boosters, and Ariane 64, with four, this new launch vehicle further extends and secures Europe’s independent access to space.