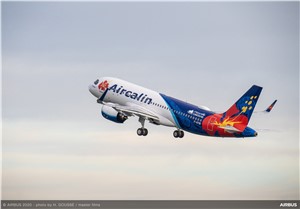 “The GTF engine was a clear choice in terms of fuel efficiency, service and support when we selected Pratt & Whitney in 2018,” said Didier Tappero, chief executive officer at Aircalin. “We are excited to provide our customers with a quieter, more sustainable flying experience.”

Since entering service in early 2016, the GTF engine has demonstrated its promised ability to reduce fuel burn by 16 percent, to reduce nitrogen oxide emissions by 50 percent to the regulatory standard, and to reduce the noise footprint by 75 percent.

Pratt & Whitney, a unit of Raytheon Technologies (NYSE:RTX) is a world leader in the design, manufacture and service of aircraft and helicopter engines, and auxiliary power units. Raytheon Technologies Corporation is an aerospace and defense company that provides advanced systems and services for commercial, military and government customers worldwide. To learn more about RTX, visit its website at  www.rtx.com . To receive press releases and other news directly, please sign up  here .

This press release contains forward-looking statements concerning future business opportunities. Actual results may differ materially from those projected as a result of certain risks and uncertainties, including but not limited to changes in levels of demand in the aerospace industry, in levels of air travel, and in the number of aircraft to be built; challenges in the design, development, production support, performance and realization of the anticipated benefits of advanced technologies; as well as other risks and uncertainties, including but not limited to those detailed from time to time in United Technologies Corp.’s Securities and Exchange Commission filings.