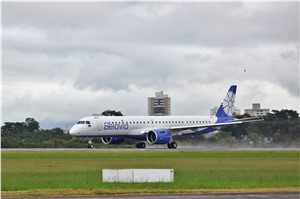 “We are delighted to welcome the first GTF-powered E195-E2 aircraft to our growing fleet and the strengthening of our relationship with Pratt & Whitney,” said Anatoly Gusarov, Belavia CEO. “These new, state-of-the-art engines will allow us to better serve our customers while benefitting from lower fuel burn and a smaller environmental footprint.”

“We are excited for Belavia to receive the fuel savings with the GTF engine that will help lower the operating costs to best serve their customers,” said Rick Deurloo, chief customer officer and senior vice president, at Pratt & Whitney.

The E195-E2 aircraft, powered by Pratt & Whitney GTF engines, has more than 25.4% reduction in fuel burn per seat than the previous-generation E195, with NOx emissions 50% below the ICAO CAEP/6 regulation and 19dB to 20dB of ICAO Chapter 4 cumulative noise margin.