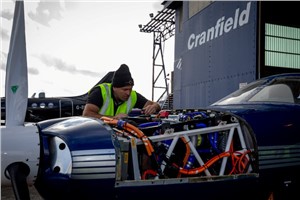 ZeroAvia, the leading innovator in decarbonising commercial aviation, has secured £12.3m ($16.3m) in Government funding through the ATI Programme to deliver a breakthrough 19-seat hydrogen-electric powered aircraft that is market-ready by 2023.

The UK Government grant for the HyFlyer II project will see ZeroAvia develop a certifiable hydrogen-electric powertrain that can power airframes carrying up to 19 passengers. To do this, it will collaborate with two partners, the European Marine Energy Centre and Aeristech. The HyFlyer II project will conclude with another world’s first hydrogen-electric flight by ZeroAvia in a 19-seat aircraft, with a 350 mile flight in early 2023.

The Government support for ZeroAvia’s 19-seat programme comes as the company also announces £16m ($21.4m) in Series A venture funding.

The grant award follows ZeroAvia’s world first flight of a commercial-grade hydrogen-electric aircraft at Cranfield in September, utilising a smaller version of ZeroAvia’s hydrogen fuel cell powertrain in a 6-seat Piper Malibu M350. This earlier flight was a milestone for the first HyFlyer project, which was also supported with a grant from the ATI Programme.

HyFlyer II will build on this success by bringing to market the first hydrogen-electric powertrain suitable for aircraft of up to 19-seats by 2023. Typically, up to 19-seat aircraft such as the Cessna 208 Caravan and the Viking Air DHC-6 Twin Otter are used in regional aviation and cargo transport worldwide. ZeroAvia’s 600kW hydrogen-electric powertrain is platform-agnostic and will begin to make zero carbon flight over meaningful distances a reality for passengers.

The announcements of the HyFlyer II programme and Series A investment come just days after British Airways announced a partnership with ZeroAvia to speed up the switch to hydrogen-powered aircraft as part of IAG’s Hangar 51 tech accelerator programme.

Hydrogen fuel-cell technology has been acknowledged by aerospace leaders and majors such as the European Regions Airlines Association and Airbus as the most practical way of rapidly removing carbon emissions from aviation.

Val Miftakhov, CEO, ZeroAvia comments: “We are delighted with the ATI’s decision to back our 19-seat powertrain development programme. This project is instrumental for delivering a market-ready hydrogen powered solution for 2023 that makes passenger-ready zero carbon aviation a reality. It once again demonstrates the ‘Jet Zero’ ambition of the UK Government to take a leading role in making flight sustainable and we are proud that they have put their faith in us again to deliver another milestone for hydrogen-electric aviation.”

For the HyFlyer II project, ZeroAvia is working again with the European Marine Energy Centre (EMEC) to deliver the green hydrogen fuelling systems required to power the aircraft for flight tests, including through mobile fuelling platforms suited to airport environments.

Neil Kermode, Managing Director at EMEC comments: “We’re thrilled to be supporting the HyFlyer II project. This is an important milestone for UK aerospace, which will exploit EMEC’s world-leading hydrogen activities. As well as providing green hydrogen to demonstrate zero carbon aviation, EMEC will develop a hydrogen refuelling solution capable of dispensing volumes approaching the speed of commercial aviation. This will be a major step forward for the sector.”

ZeroAvia will also for the first time partner with Aeristech, a leading developer of power dense and efficient air compressor solutions. Adding Aeristech to the list of collaborators for HyFlyer II allows ZeroAvia to utilise the company's advanced air compressor system as part of the new 19-seat powertrain.

Duncan Kerr, CEO of Aeristech comments:
“We’re excited to be partnering with ZeroAvia and contributing to the HyFlyer II project. Our world leading power dense and efficient compressor technology is designed to enable hydrogen fuel cells to power the future of zero emissions transport, and we cannot wait to work with Val and the team to put it into action for aviation.”

HyFlyer II is an important next step for ZeroAvia’s sequential R&D pathway to realising the transformational possibilities of moving from fossil fuels to zero-emission hydrogen as the primary energy source for commercial aviation. Eventually, and without any new fundamental science required, hydrogen-powered aircraft will match the flight distances and payload of the current fossil fuel aircraft.

Energy Minister, Kwasi Kwarteng, said:
“Next year, as the UK assumes the Chair of the G7 nations and hosts COP26, we have an exciting opportunity to lead through example on climate change as we power towards net zero with our new ambitious plan to put the UK at the forefront of the green industrial revolution and a green jobs boom.

“ZeroAvia’s HyFlyer II project will bring yet another first for zero-emission flight to British skies, boosting our work through the Jet Zero Council, as well as positioning the country as a leader in green aviation technology and ensuring the UK builds back greener after the pandemic.”

The Aerospace Technology Institute’s programme is supported by Innovate UK and the Department for Business, Energy and Industrial Strategy.

Gary Elliott, CEO of the Aerospace Technology Institute, said:
“The HyFlyer project, funded by the ATI Programme, grabbed the world’s attention with its pioneering flight just a few months ago. The ATI is pleased to support the successor to that project, HyFlyer II, which will ensure the UK is once again the home of a major step forward in sustainable aerospace technology.”

ZeroAvia predicts its hydrogen-electric powertrain will have lower operating costs than its jet-fuelled competition due to lower fuel and maintenance costs, in addition to reducing the air pollution today's aircraft emit.

As the company commercialises its technology starting in 2023, ZeroAvia plans to offer hydrogen fuel production and supply for its powertrains, and other commercial customers, substantially improving fuel availability and reducing pricing risks for the entire market.