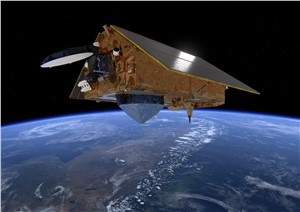 Just like your mobile phone, satellites themselves rely on satellite navigation to find their way in space. Thanks to a new ESA-developed receiver, the recently-launched Sentinel-6 is making use of Europe’s Galileo as well as the US GPS system, a fact set to sharpen the accuracy of its sea level rise measurements.

Copernicus Sentinel-6 Michael Freilich, launched on 21 November, is the world’s next radar altimetry reference mission, set to extend the legacy of sea-surface height measurements until at least 2030.

Developed by ESA with strong NASA support as part of Europe’s Copernics programme, the satellite is now being commissioned for operation by Eumetsat, Europe’s weather and climate satellite organisation.

Sentinel-6 is also the first Sentinel satellite equipped with a dual-system satnav receiver, which can make use of both GPS and Galileo signals, to perform mission-critical Precise Orbit Determination (POD).

The receiver uses GPS and Galileo signals either separately or in combination. With Europe’s satnav system the world’s most precise, the Galileo POD measurements in particular were excellent, outperforming the GPS measurements by a factor of two in terms of accuracy.

Werner Enderle, Head of the Navigation Support Office comments: “While validation activities are still ongoing, the initial results of our Sentinel-6 precise orbit determination based exclusively on Galileo data are very exciting.”

Craig Donlon, Sentinel-6’s ESA Mission Scientist, explains that being able to more precisely fix the satellite’s position in space is crucial to mission success: “Sentinel-6 is a radar altimeter, measuring sea-surface height by sending down radar pulses to be bounced back to space, deriving the distance to the ocean surface to a few centimetres.

“But to know how far the signals have travelled we need to know the satellite’s orbital height to a high level of certainty. Such a high-performance satnav receiver that includes high-quality Galileo signals is likely to give us this information very precisely. Combined with the very low onboard noise of the altimeter instrument and its onboard processing facility, these are promising signs for the working mission to come.”

Flying in space for the first time, the multi-constellation PODRIX was designed through an ESA General Support Technology Programme project, led by ESA navigation engineer Pietro Giordano: “We were driven by requirements from ESA’s Earth Observation programme: many future Sentinels will be employing these receivers as a common procurement. That put the onus on us to design and qualify a good product. The receivers are also designed for use all the way up to geostationary orbit.

“We’re not surprised to hear about the quality of its output, but also happy, because you can never be 100% sure something works until it is flying.

“This project has turned out to be an excellent example of synergy between ESA domains, because we in the Directorate of Technology, Engineering and Quality worked closely with our Earth Observation counterparts, while also getting advice from the Directorate of Navigation, the ultimate source of knowledge on Galileo signals.”

New generation of satnav circuits
The receiver contains one essential ingredient in turn: the fourth generation Advanced GPS/GLONASS Application Specific Integrated Circuit, AGGA-4 for short, funded by the Earth Observation Directorate and built by Airbus with the support of ESA’s Microelectronics section.

“Earlier versions of the AGGA relied solely on GPS and Russia’s Glonass, but with this generation we set out to make use of the other satnav constellations now available, including Europe’s Galileo,” says microelectronics specialist Roland Weigand, AGGA-4’s design support engineer. “The more signals in space you can process then the better your accuracy becomes.

“It basically works like any other GNSS receiver chip, except we have to make more effort in space, to overcome radiation, take account of signal dynamics and make use of distant signals that have been weakened by passage through Earth’s atmosphere.

“In fact, precise positioning was not the main design driver – the starting point was actually radio-occultation, where scientific and weather information is derived from GNSS signals’ passage through the atmosphere – but based on the multiple AGGA-4s already in space, they also function well for positioning. It’s motivating to know, after a long, development effort, that our customers are happy.”