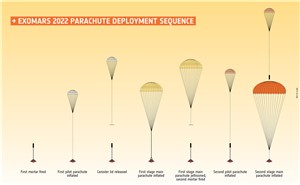 The parachute system that will help deliver the Rosalind Franklin ExoMars rover to Mars has completed the first full-scale high altitude drop test with redesigned elements following two unsuccessful tests last year. Parachute extraction and deceleration proceeded as expected, the test vehicle landed safely and the test parachutes were recovered. However, some canopy damage occurred, pointing to the early inflation process for the focus of further improvements.

“Landing on Mars is extremely difficult, with no room for error,” says ExoMars Programme Team Leader Francois Spoto. “The latest test was a good step forward but is not yet the perfect outcome we are seeking. Therefore, we will use the extensive test data we have acquired to refine our approach, plan further tests and keep on track for our launch in September 2022.”

Parachute profile
The Rosalind Franklin rover and Kazachok surface platform are encapsulated inside a descent module that will be transported to Mars by a carrier module. The descent module is equipped with two parachutes – each with its own pilot chute for extraction – to help slow it down prior to landing on Mars. Once the atmospheric drag has slowed the descent module from around 21 000 km/h to 1700 km/h, the first parachute will be deployed. Some 20 seconds later, at about 400 km/h, the second parachute will open. Following separation of the parachutes about 1 km above ground the braking engines will kick in to safely deliver the landing platform onto the surface of Mars. The entire sequence from atmospheric entry to landing takes just six minutes.

New round of high altitude tests
The test conducted from Oregon, USA was delayed from March 2020 due to COVID-19 restrictions, forest fires and unfavorable wind conditions. Logistics re-planning and compatible weather finally enabled it to take place 9 November.

The test setup saw the drop test vehicle lofted to a height of 29 km in a stratospheric balloon.

The timeline of the latest test, including extraction and deceleration, went exactly to plan. However, four tears in the canopy of the first main parachute and one in the second main parachute were found after recovery. The damage seemed to happen at the onset of the inflation, with the descent otherwise occurring nominally.

The team are now analysing the test data to determine further improvements for the next tests. Planning is underway for future tests in the first half of next year, to ‘qualify’ the complete parachute system ready for launch in September 2022.

Once safely in the Oxia Planum region of Mars in June 2023, the Rosalind Franklin rover will drive off the platform and begin its science mission. It will seek out geologically interesting sites to drill below the surface, to determine if life ever existed on our neighbour planet.

The ExoMars programme is a joint endeavour between ESA and Roscosmos. In addition to the 2022 mission, it also includes the Trace Gas Orbiter (TGO) launched in 2016. The TGO is already both delivering important scientific results of its own and relaying data from NASA’s Curiosity Mars rover and InSight lander. It will also relay the data from the ExoMars 2022 mission once it arrives at Mars in 2023.