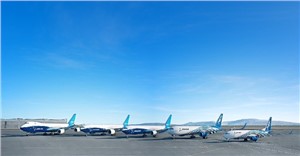 Enabled by a rebound in global trade and long-term growth, the WACF forecasts demand for 2,430 freighters over the next 20 years, including 930 new production freighters and 1,500 freighters converted from passenger airplanes.

According to the new forecast, world air cargo traffic will grow at 4% per year over the next 20 years. This growth is influenced by trade and growing express shipments to support expanding e-commerce operations. With these developments and the proven need for dedicated freighter capacity to support the world’s transportation system, the global air cargo fleet is expected to grow by more than 60% through 2039.

“Freighter operators have been in a unique position in 2020 to meet market requirements for speed, reliability and security, transporting medical supplies and other goods for people and communities around the world,” said Darren Hulst, vice president of Commercial Marketing. “Looking ahead, dedicated freighters will be even more critical to compete in air cargo markets; they carry more than half of air cargo traffic, and airlines operating them earn nearly 90% of air cargo industry revenue.”

In addition to projecting long-term demand for freighters, the WACF provides insights into air cargo performance during the pandemic, including the following:

Boeing is the world's largest aerospace company and leading provider of commercial airplanes, defense, space and security systems, and global services. As a top U.S. exporter, the company supports commercial and government customers in more than 150 countries and leverages the talents of a global supplier base. Building on a legacy of aerospace leadership, Boeing continues to lead in technology and innovation, deliver for its customers and invest in its people and future growth.