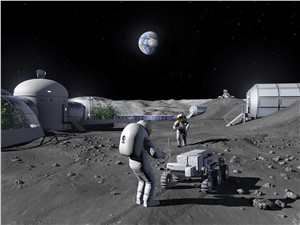 Since time immemorial, people have gazed in wonder at the Moon. Its gentle light suggests romance, its strong embrace powers the tides and it is even sometimes blamed for madness.

The Moon was once the domain of the gods; many mythologies feature lunar deities. But humans are explorers, setting sail to discover new worlds and, five decades ago, Earth’s natural satellite received its first visitors.

Now as international teams across the world forge plans to revisit the Moon, ESA is elaborating how best to facilitate this exploration.

Bold ambitions
The Moon is our nearest neighbour in space. Its enticing proximity makes it the natural place to test how people can take the next steps to Mars and beyond.

Bold ambitions foresee exploring the lunar polar regions through international cooperation, with dozens of very different commercial and institutional missions to the Moon already planned for this decade.

NASA’s Artemis programme plans to return humans to the Moon by 2024 and, in cooperation with ESA and other partners, intends to put a Gateway with living quarters for astronauts in lunar orbit. The Gateway will be home to European astronauts as well as those from around the world, and it will have a communications module developed by ESA.

ESA is working on plans for a European Large Logistic Lander to provide different types of uncrewed missions, from supply runs for Artemis astronauts, to stand-alone robotic science and technology demonstration missions and even a lunar return mission to bring samples to laboratories on Earth. It envisages regular launches starting in the later part of this decade and continuing into the 2030s.

Before then, a Lunar Pathfinder spacecraft designed to provide affordable communications services to lunar missions is due to be launched, perhaps by the end of 2022. Developed in collaboration with ESA, the spacecraft will be a mission enabler for polar and far-side missions which, without direct line-of-sight of the Earth, would otherwise have to procure their own communications relay spacecraft.

Many other initiatives come from the main space institutions in China, India, Japan and Russia, as well as private entities across the globe.

Project Moonlight
To succeed, each of these ambitious plans requires reliable navigation and telecommunication capabilities. Building these independently would be costly, complex and inefficient.

If this work were outsourced to a consortium of space companies that could put a constellation of satellites around the Moon, each individual mission would become more cost-efficient.

Having one system dedicated to lunar telecommunications and navigation could reduce design complexity, liberating missions to concentrate on their core activities.

Because missions could rely on this dedicated telecommunications and navigation services, they would be lighter. This would make space for more scientific instruments or other cargo.

An accurate and reliable telecommunications and navigation service would enable missions to land wherever they wanted. Radio astronomers could set up observatories on the far side of the Moon. Rovers could trundle over the lunar surface more speedily. It could even enable the teleoperation of rovers and other equipment from Earth.

For the past three years, ESA has been working along with industrial partners to explore the lunar market. As part of an initiative called Moonlight, ESA is now conducting deep analyses of the planned lunar missions and further developing possible solutions, both technical and business-related, to provide telecommunications and navigation services for the Moon.

Illuminating the possibilities
The Moon’s orbit is tidally locked to the Earth, which means that it rotates once as it circles the planet. As a result, it always shows the same face to Earth.

A constellation of lunar satellites would enable missions to keep in constant contact with Earth, even when on the far side of the Moon. This constellation could also allow lunar navigation in areas without direct to Earth visibility, supporting for example the landing of scientific equipment exactly where they intended, no matter how remote the location.

It would allow missions to the polar regions of the Moon to keep in touch with Earth and with any lunar base.

Finally, lowering the ticket price to lunar exploration could empower a wider group of ESA member states to launch their own national lunar missions. Even on a relatively low budget, an emerging space nation would be able to send a scientific cubesat mission to the Moon, inspiring the next generation of scientists and engineers.

The lunar satellites would provide communication and navigation signals for all these missions, ensuring adequate positioning services and constant connectivity for ground control and for scientists on Earth.

Exploring solutions
Over the past few years, ESA has conducted several feasibility studies, internally and in collaboration with industry, to understand the lunar market, its user and business parameters, and to explore the possible technical implementations of such an infrastructure.

The data capacity between Earth and the Moon would gradually exceed several hundreds of megabits per second for aggregated relay services, allowing lunar missions data capacities that compare well to home television and film streaming.

Demand for data is predicted to increase steeply after 2028.

Next steps
ESA invited companies that are prepared to study and design a lunar constellation to express their interest in the Moonlight initiative. The agency has entered into talks with interested parties, which have now prepared outline proposals that highlight their background and experience, and explain their proposed business and service model, partnership proposition and draft system concept. This is the first part of a two-stage tendering process. In the second stage, the agency will invite selected companies to submit a final tender for a detailed definition of the end-to-end service.