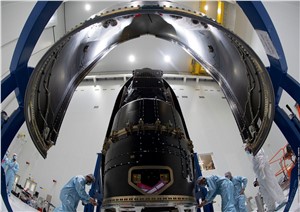 As preparations for the launch of SEOSAT-Ingenio continue on schedule, the team at Europe’s spaceport in Kourou have bid farewell to the satellite as it was sealed inside the rocket fairing. The spacecraft is currently scheduled to launch on the evening of Monday 16 November/morning of Tuesday 17 November.

SEOSAT-Ingenio, the new Spanish high-resolution land imaging mission, carries a state-of-the-art dual camera that can image Earth’s land with a resolution of 2.5 m. The satellite will benefit society through numerous disciplines such as cartography, agriculture, forestry, urban development and water management.

Since its arrival at the launch site in September, SEOSAT-Ingenio was put through a series of tests to make sure it is in good working order. Around two weeks ago, the satellite was fully fuelled, after which it was transferred to the Payload Processing Facility and was ‘mated’ on top of the upper part of the Vega Secondary Payload Adapter.

SEOSAT-Ingenio was then encapsulated in the rocket fairing, which protects it during the first part of the launch. The entire launch campaign team was there to wish farewell to the spacecraft as it was sealed from view.

ESA’s Gianfranco Spinella commented, “The encapsulation marks a significant step on the road to launch. From now on, we no longer have physical or visual access to the spacecraft. This means it is ready to join the launch vehicle on the launch pad to start its long journey and provide the images and data it was built for.

“This was a very emotional moment for all of us at the team here in Kourou, as well as for the many who have and are still contributing to the mission and cannot be present. This step in the launch campaign is primarily the result of the outstanding work performed by the prime industrial contractor Airbus Defence and Space - Spain. We are all very much looking forward to the launch next week!”

The next important step for SEOSAT-Ingenio will take place on Wednesday 11 November, when the satellite will be rolled out to the launch pad. Then on 16 November, the satellite will be launched into orbit along with the French space agency CNES’s Taranis satellite. SEOSAT-Ingenio will have a mass at liftoff of approximately 750 kg and will be placed in Sun-synchronous orbit at an altitude of around 670 km.

While SEOSAT–Ingenio is a Spanish national mission, it is the result of an international collaborative effort. The mission is funded by Spain’s Centre for the Development of Industrial Technology (CDTI) of the Ministry of Science and Innovation, but developed by ESA in the context of the European Earth Observation Architecture.

Other partners include Airbus Defence and Space, being the prime industrial contractor of the satellite, and SENER & INDRA, responsible for the payload and ground segment.

Information from SEOSAT–Ingenio will be used by different Spanish civil, institutional and government users, but also potentially by other European users in the framework of the European Union’s Copernicus programme and the Group on Earth Observations’ Global Earth Observation System of Systems.