ESA Lays Out Roadmap to Vega-C and Ariane 6 Flights 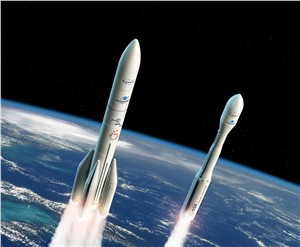 Vega-C and Ariane 6 are being developed by ESA to assure Europe’s independent access to space. The maiden flight for Vega-C is planned to take place in June 2021, and that for Ariane 6 in the second quarter of 2022.

Solid progress is being made on both Vega-C and Ariane 6 development programmes. Since March, some technical events and the COVID-19 pandemic have both impacted the progress of activities. Uncertainty from COVID-19 still persists globally to date.

Vega-C
Vega-C is a more powerful and versatile version of the Vega launch vehicle currently operating at Europe’s Spaceport in French Guiana.

Vega was on track for its return to flight, after the July 2019 failure, with its mission (VV16) in March 2020, but Europe’s Spaceport had to be closed due to COVID-19 safety measures. The VV16 launch campaign resumed in May but several further launch attempts were halted due to unfavourable weather. Vega’s return to flight, with the new SSMS dispenser carrying 53 satellites, was successfully launched on 2 September.

Between February and September no activities for the preparation of Vega-C were possible in the Vega mobile gantry while it housed the P80 solid rocket motor in readiness for flight VV16, due to safety constraints.

The qualification at system and subsystems level is currently under finalisation.

Two Vega flights, VV17 and VV18, are planned before Vega-C. Activities for the modification of the mobile gantry for Vega-C, such as modifications of the fluids networks as well as connection and installation of the new control bench for Vega-C, will have to start after VV18 now planned early February.

Vega-C is a project managed and funded by the European Space Agency. Avio is the industrial prime contractor. Arianespace commercialises Vega-C.

Ariane 6
ESA, CNES and ArianeGroup have jointly established a consolidated reference planning for Ariane 6 development and are working as an integrated team in their respective roles to make it happen. This schedule is based on analysis of recent achievements, remaining critical milestones and the impact on the programme caused by the COVID-19 pandemic.

With the successful third static fire test of the P120C solid rocket motor on 7 October, all the propulsion elements of the launcher system have completed their qualification tests.

At Europe’s Spaceport, activities for the finalisation of the Ariane 6 launch base are progressing. First integration testing with fullscale ‘mock-ups’ of the P120C strap-on booster and of Ariane 6’s central core took place in the new mobile gantry. Testing of the cryogenic arms that link the launch pad and the launch vehicle are also ongoing at Fos-sur-Mer in France, before shipping to French Guiana.

ArianeGroup is completing the challenging development and qualification of the Ariane 6 Auxiliary Power Unit for the upper stage. This device will allow Europe to offer additional capabilities in satellite deployment for the satellite constellation market.

The first Ariane 6 upper stage has been assembled in Bremen, Germany. Coupling the launcher’s tanks with the equipped engine bay of the re-ignitable Vinci engine for the first time. The upper stage is currently undergoing mechanical, fluid and electrical tests, before leaving for further tests at the DLR German Aerospace Center’s Lampoldshausen facilities in Germany.

In parallel, the first Ariane 6 core stage and the second Ariane 6 upper stage are under preparation. These specimen will be shipped to Europe’s Spaceport from Les Mureaux (France) and Bremen (Germany) respectively, for the combined tests campaign.

Following the successful combined test campaign and Ground qualification review of the launch system, the first launch campaign, with the integration of the maiden flight hardware, will start.

When all these steps are successfully completed Ariane 6 will be in a position to perform its maiden flight in the second quarter of 2022.

Impact of COVID-19
The measures taken to control the pandemic have seriously impacted the progress of activities both in Europe and at Europe’s Spaceport since March 2020, including as a result of social distancing, site lockdowns and reduced capacity at facilities, travel restrictions, quarantines and confinement measures.

This has considerably slowed all working and operational processes for prime contractors and their respective subcontractors around 13 European countries. Ongoing pandemic effects continue to disrupt on-going development and operations.

“We constantly and closely monitor the COVID-19 impact and technical challenges on our ongoing space transportation developments and operations. Together with our contractual partners and participating States, ESA continues to pull together towards our common priority goals which are the maiden flights of Vega-C and Ariane 6,” commented Daniel Neuenschwander, Director of Space Transportation at ESA.

Tell a friend:
ESA Lays Out Roadmap to Vega-C and Ariane 6 Flights