From Earth orbit to the Moon...and beyond! 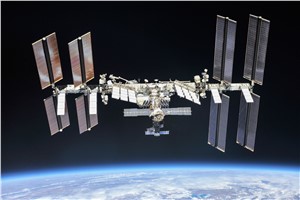 As the International Space Station (ISS) marks two decades of continuous human presence, circling the Earth more than 120,000 times with key participation from Airbus, planning is now underway for an exciting next step: setting humanity on a sustainable course to the Moon, with the company having an important role in this new adventure.

Airbus’ long list of ISS contributions covers activities from development of software and experiments, mission preparations and system integration to flight operations, cargo resupply, hosting of payloads aboard the facility, and the provision of such infrastructure elements as the rack-mounted regenerative life support system.

Cooperation that spans the globe
With the ISS’ international scope, Airbus has worked with the primary partners, spanning Europe, the U.S., Russia, Japan and Canada – cooperating with national space agencies and industry, thereby providing a framework for the company’s involvement in future space exploration.

“With our achievements on the ISS, Airbus has earned its role in taking humankind back to the Moon and deeper into space.”
Gerd Hajen, Systems and Operations Engineer in Airbus’ Low-Earth Orbit and Suborbital Missions Department

Airbus’ ISS involvement traces its roots to the space station’s early days, as the company produced Data Management System computers for Russia’s Zvezda Service Module. Zvezda was launched during the summer of 2000 as the station’s third module, and its Airbus-built fault-tolerant computers collect data and provide navigation, handle command/control, along with facilitating communications and operations for the station’s Russian segment.

Beginning in 2006, the Airbus-supplied Minus Eighty-Degree Laboratory Freezers for ISS (MELFI) were added to the station, enabling refrigerated storage and freezing of biological and life science samples.

More recently, the Airbus-developed Bartolomeo platform has been attached to the ISS’ exterior for hosting payloads. Airbus offers an end-to-end service with technical support for payload preparations, launch and installation, operations and data transfer, as well as an optional return to Earth. Scheduled to enter service early next year, the Bartolomeo platform offers the only unobstructed ISS view towards Earth and into outer space, with applications for its hosted payloads including (but not limited to) Earth observation, robotics, material science and astrophysics.

Airbus’ ISS prime contractor roles
During the past 20-plus years, Airbus has stepped up as the prime contractor for two key ISS elements: the Columbus pressurised module that has served as a permanently-attached multifunctional laboratory since February 2008; and the Automated Transfer Vehicle (ATV) cargo spacecraft for ISS resupply missions, which performed five heavy-lift flights between 2008 and 2015.

The Columbus module is Europe’s largest single contribution to the ISS, and Airbus’ responsibilities have covered the module’s engineering, development of experiments, integration and testing, launch preparations and processing. In addition, Airbus helped set up the Columbus control centre and ground segment in Oberpfaffenhofen, Germany, and provided support for flight control and operations at this German ground facility.

'Keeping the lights on' with ATV
In welcoming 240-plus crewmembers aboard the ISS since it was first occupied on 2 November 2000, the space station has required regular replenishment of supplies. The Airbus-developed Automated Transfer Vehicle helped keep the ISS alive and active by delivering more than 31.5 tonnes of supplies (including propellant, water, air, food, and scientific research equipment), while also using its own propulsion system to raise the station’s orbit numerous times and help manoeuvre it clear of space debris.

The ATV's capabilities – particularly its automatic docking with the ISS and providing life-supporting services – underscored Airbus’ mastering of vital technologies that can be applied in future space exploration missions. This, together with all Airbus’ expertise demonstrated throughout the space station’s orbital career, contributed to the company’s selection as a full partner in Orion – the next U.S.-led spacecraft to send humans into space – ESA’s contribution to NASA’s Artemis programme.

Over the Moon with Orion
Airbus is responsible for Orion’s European Service Module, which will provide propulsion, power, water, oxygen and nitrogen, as well as keeping the spacecraft at the right temperature and on the correct flightpath. Three European Service Modules are contracted to be developed and delivered by Airbus for use with Orion as it takes crews to the future Gateway lunar orbiting station for exploration of the Moon – with the possibility for travel further out in space…even reaching an asteroid and perhaps Mars.

Tell a friend:
From Earth orbit to the Moon...and beyond!