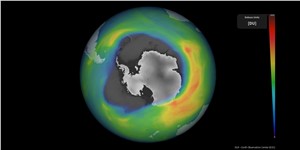 Measurements from the Copernicus Sentinel-5P satellite show that this year’s ozone hole over the Antarctic is one of the largest and deepest in recent years. A detailed analyses from the German Aerospace Center indicates that the hole has now reached its maximum size.

The size of the ozone hole fluctuates on a regular basis. From August to October, the ozone hole increases in size – reaching a maximum between mid-September and mid-October. When temperatures high up in the stratosphere start to rise in the southern hemisphere, the ozone depletion slows, the polar vortex weakens and finally breaks down, and by the end of December ozone levels return to normal.

This year, measurements from the Copernicus Sentinel-5P satellite, show that this year’s ozone hole reached its maximum size of around 25 million sq km on 2 October, comparable to the sizes of 2018 and 2015 (where the area was around 22.9 and 25.6 sq in the same period). Last year, the ozone hole not only closed earlier than usual, but was also the smallest hole recorded in the last 30 years.

The variability of the size of the ozone hole is largely determined by the strength of a strong wind band that flows around the Antarctic area. This strong wind band is a direct consequence of Earth's rotation and the strong temperature differences between polar and moderate latitudes.

If the band of wind is strong, it acts like a barrier: air masses between polar and temperate latitudes can no longer be exchanged. The air masses then remain isolated over the polar latitudes and cool down during the winter.

Diego Loyola, from the German Aerospace Center, comments, “Our observations show that the 2020 ozone hole has grown rapidly since mid-August, and covers most of the Antarctic continent – with its size well above average. What is also interesting to see is that the 2020 ozone hole is also one of the deepest and shows record-low ozone values. The total ozone column measurements from the Tropomi instrument on Sentinel-5P reached close to 100 Dobson Units on 2 October.”

In the 1970s and 1980s, the widespread use of damaging chlorofluorocarbons in products such as refrigerators and aerosol tins damaged ozone high up in our atmosphere – which led to a hole in the ozone layer above Antarctica.

In response to this, the Montreal Protocol was created in 1987 to protect the ozone layer by phasing out the production and consumption of these harmful substances, which is leading to a recovery of the ozone layer.

Claus concludes, “Based on the Montreal Protocol and the decrease of anthropogenic ozone-depleting substances, scientists currently predict that the global ozone layer will reach its normal state again by around 2050.”

ESA has been involved in monitoring ozone for many years. Launched in October 2017, Copernicus Sentinel-5P satellite is the first Copernicus satellite dedicated to monitoring our atmosphere. With its state-of-the-art instrument, Tropomi, it is able to detect atmospheric gases to image air pollutants more accurately and at a higher spatial resolution than ever before from space.

Tell a friend:
Antarctic ozone hole is one of the largest and deepest in recent years