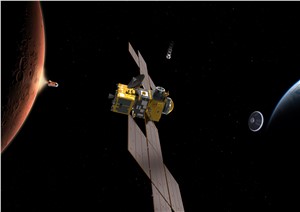 Thales Alenia Space, the joint venture between Thales (67%) and Leonardo (33%), has signed an Authorization To Proceed (ATP) with Airbus Defence and Space, prime contractor of the program, to contribute to the Earth Return Orbiter (ERO), the key element of the Mars Sample Return (MSR) Mission, which will be carried out through an international cooperation led by NASA. A first tranche, worth around €11 million, will be related to the B2 phase for a global contract value of around €130 million.

Thales Alenia Space will be responsible for:

The Earth Return Orbiter spacecraft is composed by the Return Module and the Orbit Insertion Module. The Return Module (RM) hosts the NASA payload devoted to the capture of the Martian samples orbiting around Mars, of their containment and delivery to Earth. The Orbit Insertion Module (OIM) is an additional chemical propulsive stage, for inserting the spacecraft into Mars orbit. This module is crucial as he will allow to reduce the spacecraft velocity enabling the Martian gravity to capture ERO in a stable orbit. After the maneuver successfully completed, IOM will be separated from RM in order to save mass prior to the return to Earth.

Hervé Derrey, CEO of Thales Alenia Space stated: “We are enthusiastic to be part of the core team on this revolutionary mission of bringing Mars to Earth, that will open a new frontier in Mars exploration missions. Mars Sample Return has an immense scientific importance, that could lead to new findings regarding Martian geology, climate and life itself. Our involvement in this new mission is not only reflecting our Space for Life aspiration but will take advantage of all we already have developed in term of technologies including the  planetary protection duty.”

Massimo Claudio Comparini, Senior Executive Vice President Observation, Exploration and Navigation at Thales Alenia Space, added: “Thales Alenia Space will bring its expertise in the Mars exploration domain, leading the ExoMars 2016 and 2022 missions to search for life on the Red Planet. The Trace Gas Orbiter launched in 2016 in orbit around Mars is analyzing the Martian atmosphere before becoming the communication relay for all the upcoming missions landing on Mars”.

Leonardo is also widely involved in Mars exploration missions, from the ExoMars 2016 and 2022 missions to the Mars Sample Return program. On this latter program, Leonardo is studying and designing the two robotic arms that will collect and transfer the Martian samples on the Mars Ascent Vehicle (MAV).

About the Mars Sample Return mission
By 2031, the Mars Sample Return mission will collect in situ Mars surface samples and bring them back for study in terrestrial laboratories. Firstly, the MSR Sample Retrieval Lander will descend to the planet’s surface carrying the Sample Fetch Rover (SFR) and the Mars Ascent Vehicle (MAV). SFR will collect the samples from the Martian surface that have been cached by the NASA Mars 2020 Perseverance rover and the SFR will transfer these samples into Mars Ascent Vehicle, a mini-rocket developed by NASA, which will launch them into Mars orbit. In that moment, the ERO spacecraft, that will be launched in 2026, will be ready to locate and capture the samples released by the MAV. After the capture, the samples will then be sealed in a biological containment system and placed inside an Earth Entry Vehicle. ERO will then leave Martian orbit and head back to Earth. When it arrives back in Earth orbit, it will release the Earth Entry vehicle  that will be recovered on ground and the sample analyzed.